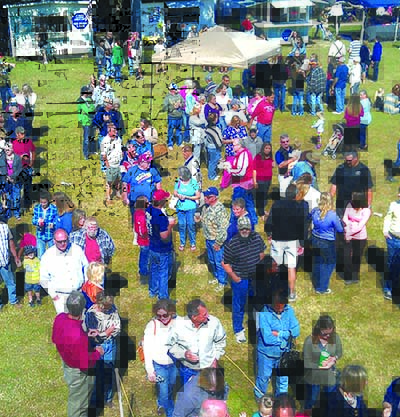 The Elberta Sausage Festival returns to TownPark (13052 Main St. Elberta) on Oct. 27 from 8 a.m. ‘til 5 p.m. Admission is free. Held just north of the town’s only stop light on Hwy. 98, the event attracts up to 20,000 revelers, according to organizers.
A 40 plus year tradition in the historic town, the festival is a major regional event that attracts a cross section of the community in what has become a reunion type atmosphere. It is also the main revenue source for the area’s volunteer fire department.
Enjoy Elberta’s famous German sausage and sauerkraut, plus continuous entertainment, and 250 arts & crafts booths. There will also be carnival rides. Of course, there will also be a Bier Garten featuring a large selection of imported and domestic beers. Other scrumptious foods will include German-style filled cabbage, potato salad, goulash, red beans and rice, hamburgers, hot dogs, BBQ sandwiches, ice cream, popcorn, peanuts and homemade baked goods. The Bellview Stumpfiddle Band will perform with the North End Stompers and other cloggers. There will also be polka, country and German music.
Spearheaded by Elberta’s Volunteer Fire Department since 1978, festival proceeds are used for improving not only the fire department, but the town as well. Additionally, local non-profits benefit from the festival through proceeds from their booth sales and parking lot fees. The festival is held twice a year – on the last Saturday of March and the last Saturday of October. Although it has been tweaked a bit over the years, the original secret recipe for Elberta’s famous sausage is credited to Alfred Stucki, who managed Elberta’s Locker Plant from 1953 until his death in 1973. About 7,000 pounds of German Sausage are consumed at each fest. More info: elbertafire.com.