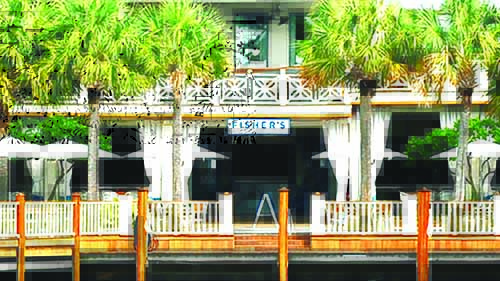 Now entering its fourth year, the Southern Grace Dinner series created by Fisher’s at Orange Beach Marina owner Johnny Fisher has added a prestigious co-sponsor.
Coastal Living Magazine will co-sponsor all six dinners in the series this summer, including the magazine’s 20th anniversary dinner scheduled on June 22 with Chefs Lisa Marie White, Michael Gulotta, Nina Compton and Justin Devillier joining Fisher’s Executive Chef Bill Briand in the kitchen.
“Coastal Living saw what we were doing and we hosted their executive team last year. Tthey all left raving about the area,’’ Fisher said. “They liked what we created and wanted to be a part of it.’’
Cost for the dinners is $149 per person, including wine pairings, tax, gratuities and a cocktail reception. In addition, each patron will receive a copy of the Coastal Living’s Beach Cocktails book. Tickets are available at fishersobm.com.
Fisher said the guest chefs that will be here, in addition to being extremely busy with their own restaurants, schedule similar one-off type dinners all over the country.
“These chefs do so many events, plus they stay slammed at their own restaurants, that scheduling takes lots of jiggling, but it all worked out,’’ he said.
As much as James Beard nods, Fisher and Chef Briand make sure that they solicit culinary peers that understand what Fisher’s is about – fresh Gulf seafood.
“We do not recruit chefs unless we are pretty confident they will fit into what we do here,’’ he said. “We want to make sure that they add to our chemistry.’’
Among the invited chefs, Fisher is especially excited to work with Ryan Smith of Staplehouse in Atlanta (July 13), whose restaurant garnered best new restaurant honors from Bon Appetit and was in the running for that same title from the James Beard Foundation.
He also looks forward to welcoming Katie Button (Aug. 3) of Nightbell and Curate in Ashville. Button also was center stage for seven months at the world-renowned El Bulli in Spain. Button’s dinners will include pairings with beers from Blackberry Farms.
Fisher said in addition to being great PR for the Gulf Coast and adding to the vacation value for tourists, the dinner series has been an incredible and fun experience for his kitchen staff, noting that his chefs got to spend an entire day prepping food in the kitchen alongside James Beard award winner John Besh.
The chefs will feature Alabama Gulf seafood on their menus, and guests can expect an exclusive night of personal attention and fellowship while enjoying an amazing meal. “With these dinners, we’re creating a very special and memorable experience, for the chefs, our team, and our guests,” Fisher said.
Guests will be able to mingle with the chefs during the cocktail reception and communal seating will encourage conversation, fun and laughter.
A portion of the proceeds from each Southern Grace dinner will go to support the Southern Foodways Alliance (SFA), a non-profit organization based at the University of Mississippi’s Center for the Study of Southern Culture that documents, studies and celebrates the diverse food cultures of the changing American South.
The list of Southern Grace’s visiting chefs reads like a “fantasy kitchen” dream team. Boasting numerous James Beard nominations and awards between them. The chefs include Tory McPhail (Commander’s Palace, SoBou) and Justin Devillier (La Petite Grocery). Expect all the chefs to bring the innovation and skill they use to delight diners in their own restaurants.
It’s no wonder that the host restaurant’s namesake believes the caliber of culinary talent he as assembled to share fine flavors at the Southern Grace Dinners is unparalleled anywhere in the country.