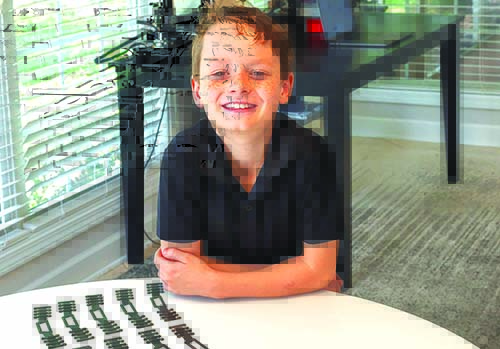 Gulf Shores 3rd grader makes “ear savers” to help others during pandemic
O’Connells have produced & donated more than 4,000 ear guards thus far
By Fran Thompson
Nine year old Jackson O’Connell, a third grader at Gulf Shores Elementary School, was just getting established as an entrepreneur when the Covid-19 pandemic began its deadly spread throughout the world. The owner of Jax Bag Tags, Jackson was using a 3-D printer to make book bag tags, key chains and other custom accessories that he could ship to order and, mostly, give to his friends as gifts.
But as the coronavirus spread, Jackson decided he wanted to do more. With help and guidance from his parents, he decided to use the family’s three 3D printers to make ear guards to improve the comfort levels of health care workers and anyone else that wears a mask for extended periods during this pandemic. The guards are designed to hold in place the elastic on facemasks, thus relieving the pressure the elastic strings place on ears.
“My 3D printers are taking a break from bag tags.’’ Jackson said on his website. “I’m printing ear savers so people’s ears don’t hurt when they are wearing face masks because of the coronavirus.’’
Jackson’s mom, Kristin O’Connell, a yoga instructor at Glow, said she and her husband, Ken, who is in engineering sales, have shipped more than 4,000 ear savers so far. Word has spread through social media as well as through notes the couple includes in each shipment.
The seven year Gulf Shores residents have shipped domestically to hospitals and medical offices from New York to California. Locally, they have presented hundreds of ear savers to Thomas Hospital and South Baldwin Regional Medical Center. They have also dropped off masks at Community Senior Life Center in Orange Beach.
Both Ken and Kristen wear masks when they shop, and they routinely pass out the ear savers at Public and CVS Pharmacy when employees ask about them. “We just take some with us and hand them out to whoever wants them,’’ Kristen said.
“People will order a couple and then go to work and see other people who ask how do you get them,’’ Kristen said.
It takes about an hour to make eight ear savers on each 3-D printer. So, at full capacity, the O’Connells can produce close to 200 in an eight hour shift. Some of the ear savers have the word Hero imprinted on them.
“We initially called them ear guards, but we started getting thank you notes from people, and a few of them called them ear savers,’’ Kristen said. “Jackson said he loved that and that’s what we should call them.’’
Jackson knows that his ear savers are a hit and are helping people be more comfortable as they work in public during the pandemic.
He seems to enjoy the media attention and has become quite savvy from doing interviews.
“He is super proud about it,’’ Kristen said. “He’s had a few interviews and he is getting pretty good at them, too.’’
The O’Connells make no profit from producing ear savers, and they give them away to anyone who asks. For more info about how to attain an ear saver or to make donations that will go toward making masks to donate to others (extra money raised will go to help families directly impacted by the Covid-19 virus), visit jaxbagtags.com.