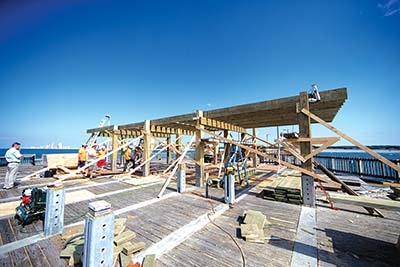 Gulf State Park Pier will open sometime in August
By Fran Thompson
The re-opening of the Gulf State Park Pier has been delayed until sometime in August due to work stoppages during recent storms and additional unplanned plumbing and electrical improvements, but officials are assuring visitors that the $2.4 million renovation to one of the Gulf’s premier piers will be worth the wait.
Improvements include replacing the wooden decking and handrails, creating a new accessible observation deck, and installing new turtle-friendly lighting
“The pier reopening delay was caused by several factors, including shipping delays due to COVID-19, minor structural damage from Tropical Storm Cristobal, and in order to address the conditions of the electric and water lines,’’ said Gary Ellis, Director Community Relations and Administration at Gulf State Park.
Since the pipes were located under the decking, contractors were unaware of the poor condition of electric and water lines until the existing decking was removed, Ellis said. The new electric lines will be housed above the decking in conduits, making it easier for maintenance teams to access going forward.
“We are taking the opportunity to make these upgrades now, rather than closing the pier down again in the future,’’ Ellis said.
The pier has been closed since May 11. The replacement decking and handrails will utilize Ipe, a Brazilian hardwood with a projected lifespan of 30 years compared to 10 years for the treated pine that is being replaced.
Handrails will be tilted to prevent anglers and visitors from leaving material on top of the handrails and gulls and pelicans from using the handrails as perches.
The most anticipated new feature at the revamped pier will be a 50-foot by 24-foot observation deck at the octagon on the end of the 1,544-foot-long structure. The observation deck will allow visitors to sightsee without interfering with fishermen and also be a safer place for children and tourist group trips to congregate.
Bathrooms, concession areas and the bait shop areas will also be renovated. Other new features include new covered seating for the concession area, indoor tackle and souvenir retail, comfort stations at the midpoint of the pier and wheelchair accessible rail fishing.
The renovation being funded by a federal grant through the Natural Resource Damage Assessment program of the National Oceanic and Atmospheric Administration.
The old pier was destroyed in 2004 by Hurricane Ivan. At 1,540 feet, the new pier is the second longest pier on the Gulf of Mexico and has 2,448 feet of fishing space. Sheepshead, Red Drum, Spanish Mackerel, Flounder, Florida Pompano, Cobia and King Mackerel and Sharks are common fish caught at the pier.
“We’re doing everything within our power to make Gulf State Park’s iconic fishing pier the most enjoyable and memorable experience for our visitors,’’ Ellis said. “The pier reopening celebration will be in August and we will share more details about the eve