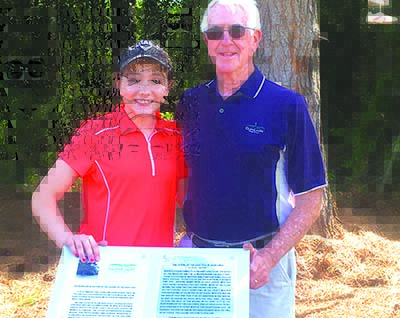 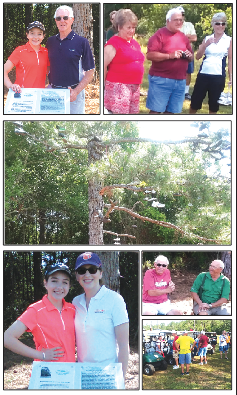 What started out as a short essay for a school project has turned into a beautiful plaque next to the tees at hole No. 3 at GlenLakes Golf Club that should also lead to some barefoot golf rounds at the popular member owned public golf club, located in Foley.
The copy for the plaque for the Legend Of The Shoe Tree plaque at GlenLakes, written by Elly Musial, daughter of the club’s golf pro/GM David Musial, was dedicated during a March 5 ceremony on Hole No. 3.
During the ceremony, Sam Strite, one of the event organizers, thanked all those who helped with the project, including Chick Gripp, who spent time clearing the area, Jim Lorenz, who came up with the idea and made a post for the plaque, and Musial and club grounds superintendent William Dabney.
Emmy Musial, who helped her younger sister write the legend, was also introduced and hit the first tee shot from hole no. 3. Emmy hit her shot long and straight. So, she did not have to leave the ceremony barefoot.
A student at St. Luke’s in Mobile, Elly Musial wrote the Legend two years ago when she was 13. “It soon went viral on the internet, and today it all comes to fruition with Elly’s joining us for the dedication ceremony,’’ Strite said.
Strite said in reference to her age and GlenLakes reputation for being the best golfing value on the Gulf Coast, he asked Elly to dedicate the plaque with a water bottle instead of champagne.
GlenLakes, which will host the National Junior College Golf Championships later this month, also printed flyers about The Legend, which will be available in the clubhouse. Pictured: Sam Strite, Elly & Emmy Musial & attendees at the dedication ceremony.

The Legend of The Shoe Tree At GlenLakes Plaque

It is estimated that there are over 76 shoe trees in the United States and in the United Kingdom. Some have stories associated with their beginning but most have none and few have a story as to why it exists. We are lucky at GlenLakes Golf Course because our shoe tree has its own LEGEND. In 2016, as a school project for her 7th grade at St. Luke’s Episcopal School in Mobile, Elly Musial, the 13 year old daughter of David Musial, PGA Professional and General Manager of GlenLakes, researched the history of the TREE and wrote the LEGEND below.
••••••••••
When a golfer comes to GlenLakes Golf Club, Vista Hole #3, the majestic par 3 with water down the right side – there is a feeling of mystery that takes hold of the golfer. To the left of the tee box there is a large pine tree, holding hundreds of pairs of golf shoes. Why are they there? How did they get there? What is the story behind it? No one knows for sure…As the LEGEND goes, when a golfer played at GlenLakes, starting over 20 years ago – if he hit a ball in the water, his group told him that if he hit another in the water, he had to throw his shoes in the tree. AND, play the rest of the round in his bare feet. If the player was up to the challenge, and he proceeded to hit a second ball into the water, the shoes came off! In disgust, the player threw the shoes high into the tree. The LEGEND lives on to this day.
Thank you, Elly, for your fine job of research and reporting!