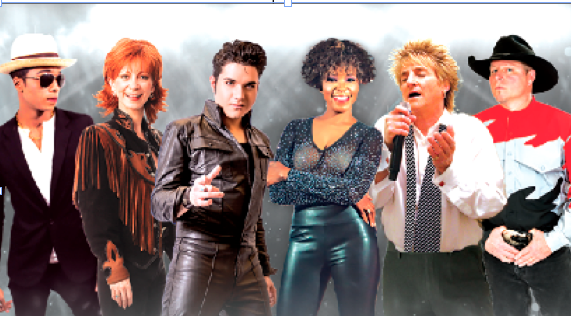 Legends in Concert kicks off its all-new location and residency with an incomparable cast of music legends at OWA in Foley beginning Friday, June 7. The longest-running show in Las Vegas will bring audiences to their feet with performances paying tribute to Bruno Mars, Reba McEntire, Elvis Presley, Whitney Houston, Rod Stewart and Garth Brooks, at the newly constructed OWA Theater. The show will feature not only the world’s greatest tribute artists, but also dancers, back-up vocalists, a live band, magnificent costumes, elaborate theatrical sets, a full array of incredible special effects, and much more.
Legends in Concert will perform Tuesday through Saturday at 7:30 p.m. with additional matinee shows available at 4 p.m. on Saturday and Sunday. Adult tickets are 34.95 (+taxes/fees) and Child (ages 4-12) tickets start at $17.95 (+taxes/fees). Legends in Concert also offers discounted Military tickets for $27.95 (+taxes/fees). VIP balcony section and preferred seating will also be available.
For more than three decades, Legends in Concert has proudly entertained more than 30 million fans worldwide. To purchase tickets, visit LegendInConcert.com/OWA or the Legends Theater Box Office at OWA or by call 251-369-6100.
“Partnering with a world-class show like Legends in Concert, creates another great opportunity for guests to enjoy a memorable night out at OWA,” stated Cody Williamson, President/CEO of Creek Indian Enterprises Development Authority. “We will continue investing in exciting entertainment elements not only for our destination, but to encourage year around appeal of the Gulf Coasts for both visitors and locals alike.”
Audiences will “Treasure” the sensational tribute to Bruno Mars, portrayed by Isaiah, and “Turn On the Radio” with Corrie Sachs’ tribute to the music catalog of Reba McEntire. Witness the return of the King, Elvis Presley, portrayed by the “Hunk of Burning Love” Victor Trevino and experience the voice of a generation, with Jazmine’s powerhouse tribute to Whitney Houston. Rod Stewart is “Forever Young” with Rob Caudill’s rockin’ tribute to ‘Rod the Mod’ while “The Thunder Rolls” in Shawn Gerhard’s stunning recreation of Garth Brooks.
“Building on our show’s over three and a half decades of success, we are thrilled to unveil our legendary production to another fast-growing, family-friendly destination, and entertain guests visiting Coastal Alabama for many years to come,” said Brian Brigner, chief operating officer of On Stage Enterprises, producers of Legends. “The theater looks fantastic and possesses technical capabilities that are absolutely going to Wow audiences.”
Since its debut in 1983, Legends in Concert has earned countless entertainment industry awards including “Show of the Year,” “Entertainers of the Year,” “Grand Slam,” and the prestigious “Show of Shows” awarded by the International Press Association and was most recently awarded the 2018 “Casino Production Show of the Year.”