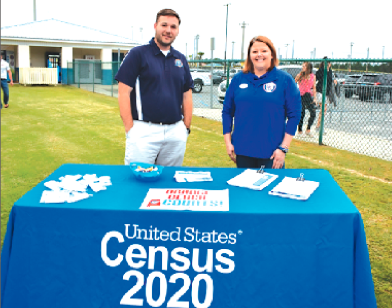 Orange Beach, like many municipalities in Alabama, has a Complete Count Committee in place to help the statewide effort to educate the public in Alabama about the importance of being counted in the upcoming 2020 Census.
Alabama Counts is a program emphasizing the need to ensure Alabama’s population is accurately and fully counted. The state is at risk of losing federal funding, a congressional seat, and an Electoral College vote. These outcomes are based on projected results of the 2020 Census. The 22nd decennial census, mandated by the U.S. Constitution, begins on April 1, 2020. The census counts every person living in the United States. Business, industry, nonprofits, researchers, and governments use this information to understand and serve the public.
Alabama Counts program. Jean Hogue, Partnership Specialist with the U.S. Census Bureau, has been assisting the committee. Committee members will be at city events leading up to the official start of the Census count in the spring. Orange Beach Counts Census 2020 booths have already been displayed at the Orange Beach Town Hall on Oct. 1, the Orange Beach Middle School football game against Gulf Shores Middle on Oct. 24 and other city functions.
Starting in mid-March 2020, Alabama households will receive a letter from the U.S. Census Bureau with instructions on completing 2020 census forms. The Census Bureau is encouraging an online response but will have a toll-free number for households to complete their information over the phone or request a traditional paper form. Additionally, Census takers will be hired to work in their communities and go door to door to help collect responses. The information collected during the census is confidential and cannot be used against a person by any group or agency.
Pictured: Sean Brumley, Orange Beach GIS specialist, and Mindy Smith, Orange Beach Community Development Office Manager, spreading the census word at O.B. Sportsplex.