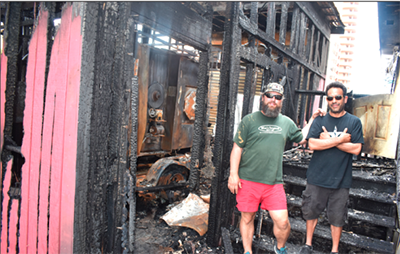 Meat lovers in Orange Beach were in mourning over Memorial Day weekend, as two of its most popular restaurants, Big Mike’s Steak House on Canal Rd. and Moe’s BBQ on Perdido Beach Blvd., placed emergency calls two days apart to the Orange Beach Fire Department to come put out blazes.
The Big Mike’s fire on May 23 forced evacuation of the building during dinner service and the fire at Moe’s occurred around 9 p.m. on May 26, as employees were closing up and its last four customers were finishing their meals. There were no injuries reported at either location.
The fire at Big Mike’s was less destructive and the restaurant, which also has locations in Andalusia and Thomasville, is expected to reopen before July 4 weekend, according to its facebook page.
The restaurant has been operating at capacity since opening in Orange Beach in the summer of 2017.
According to Big Mike’s facebook post, wasn’t the only thing that had flames on it on May 23. “We are hoping to be able to repair damages and be back open in about a month. Thank y’all for the outpouring of support from everyone and for everyone who checked in on us during this unfortunate, stressful event. We will keep y’all posted on progress in the upcoming weeks.’’
The fire at Moe’s was way more extensive and owners are waiting for a report from insurers as to whether they will renovate the building or tear it down and rebuild. But the restaurant employees working out of a huge RV in the parking lot that is the centerpiece of Moe’s catering operations, were bak serving BBQ within 48 hours of the fire.
Moe’s owners, who have been at the Orange Beach location for 14 years and completed a major upgrade to their restaurant facility just two years ago, were scheduled to ask Orange Beach City Council to issue a permit allowing them to operate from the RV on June 2.
With the city’s expected approval, Moe’s will continue to serve its signature dishes daily beginning at 11 a.m. Moe’s also has locations in Foley and Daphne open for in-house dining, take out, delivery and catering.
Moe’s fire started in its smoke pit and spread to the restaurant and kitchen. There were reports of a propane tank explosion, but Moe’s co-owner Mark White said the reported explosion was a Co2 tank, and it was not the cause fo the fire. He said the OBFD had responded and put out the fire within 20 minutes of the 911 call.
Moe’s received an outpouring of support from its facebook post about the fire. Within two days, a local band, Hundred Dollar Car, was hosting a fundraiser for Moe’s employees at another Orange Beach restaurant, OSO.
“The community support has been over the top,’’ White said. “Just the outpouring and offers of help from our customers and the surrounding businesses has been so overwhelming. We had more than 40,000 responses from the first facebook post.’’
Both White and co-owner Matt Lovato said they had no plans of leaving Orange Beach or their current location.
“We like it here and we want to stay,’’ White said. “It’s been our home for 14 years. Our out of towners are familiar with us being in this location.’’
Moe’s has received accolades from USA Today and The Daily Meal for being one of the best BBQ chains in America. It has also been recognized as the fastest growing, emerging restaurant chains by Restaurant Business Magazine, and one of the Top 10 Rib Joints in the U.S. by Relish.
The Moe’s owners’ sentiments were well stated on its facebook page in a post thanking the OBFD for putting out the fire so quickly, and customers, locals, friends and families for their calls, visits and facebook messages in support.
“We appreciate all of your support and kind words. We will be back rockin’ ‘rollin’ in no time.’’
Pictured: Moe’s owners Mark White and Matt Lovato near the pitroom where the fire at their Orange Beach BBQ restaurant started.