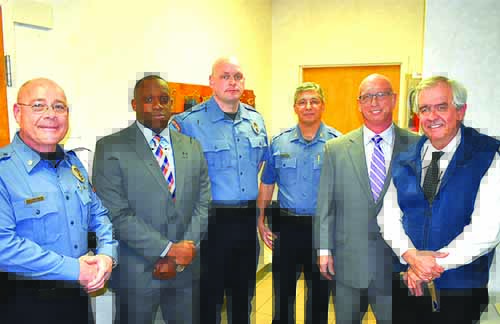 By Marc Anderson
Three new Orange Beach police officers were introduced at the Orange Beach City Council meeting on Tuesday, Jan. 16, 2018 and sworn in by Municipal Judge Julian “Buddy” Brackin. Police Chief Joe Fierro introduced Kenneth Hempfleng, Nicholas Gaskin and Dillen Malone.
Hempfleng, a veteran in law enforcement, will join the department as a part-time officer. Chief Fierro said Hempfleng was certified in 1987 by Alabama Peace Officers’ Standards and Training Commission (APOST).
“He began in Prichard,” Chief Fierro said, “and then in 1988 he joined the Daphne Police Department. He’s currently a lieutenant over patrol and their support services and he should be retiring at some point in the not too distant future. But he’ll join us as a part-time officer. I should also note that he graduated from the FBI National Academy in 2016. So he’s a great addition to the police department. He has a lot of experience we’ll be able to capitalize on.”
Officer Gaskin hails from Gadsden and is currently a patrol sergeant with Rainbow City. “Prior to that he served in Etowah County,” Chief Fierro said. “He’s been an officer for over 11 years. He was APOST certified in 2004. Once again, a vast amount of experience is coming here to Orange Beach and a great addition to the police department.”
Malone is a graduate of Spanish Fort High School, where he earn all-state honors as an outside linebacker in 2011, according to Chief Fierro. “He’s attended both the Coastal Community College and Huntingdon (College) where he has received his bachelor’s degree in Criminal Justice,” Chief Fierro said. “He’s also a veteran of the U.S. Air Force and is currently a reservist.” Malone will be attending the APOST Academy in Selma, beginning on Jan. 22.
Pictured: Assistant Chief Steve Brown, Malone, Gaskin, Chief Fierro, Hempfleng and Judge Brackin.