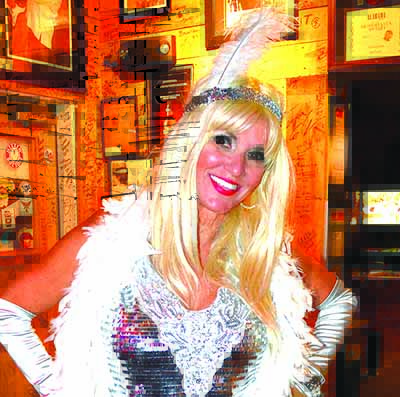 Participants are encouraged to dress up like their favorite toys or dolls for a good cause and join Rhonda Hart (pictured) for her 10th Annual Barbie fundraiser on Friday, December 14 at the Flora-Bama. The party on the state line will start at 5:30 p.m., and guests are asked to bring a toy for distribution to Toys For Tots and Secret Santa. There is no cover charge and prizes will be presented in several categories for both men and women, including Ugliest Boy Barbie.
The Grammy nominated entertainer first organized the party as a way to turn her birthday party into a charity event and it has now become a Christmas tradition. Hart and her friends will be on stage playing music throughout the party.
“Everybody likes dressing up in the outfits, even the guys,’’ Hart said. “It will be fun. It alway is fun.’’ Hart, who first came to the Alabama Gulf Coast to play at the Frank Brown International Songwriters Fest, has been singing and performing since she was a small child. She has written award winning songs, toured with and been the opening act with many of country music’s best know stars. Her song, “Waiting For The Phone To Ring,” charted in the USA and was a No. 1 hit in Europe. She and Deanna Carter earned a Grammy nomination for “Did I Shave My Legs For This” in 1998.