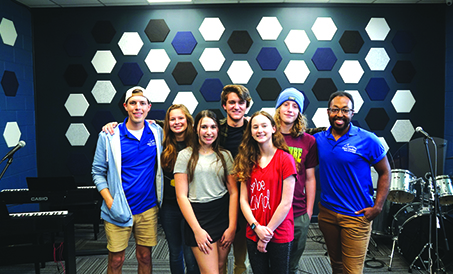 A car wash fundraiser at Jimmy G’s Toybox in Orange Beach on April 15 (Good Friday) from 9 a.m. ‘til 5 p.m. will help some City of Orange Beach Expect Excellence music students take a music education trip to Orlando this summer.
Jimmy G’s is located at 4571 Easy Street just to the west of The Meat Mart and Duck’s Diner on the north side of Canal Rd. The suggested donation is $25. For more sponsor or Expect Excellence Band info, contact Caleb Pittman at 251-981-6028 or 205-602-6597 or email cpittman@orangebeachal.gov.
Caleb Pittman, the Expect Excellence musical director, organized the youth rock band just before the COVID-19 shutdown of March 2020.
Band members include Charlee Rowland, Molly Harvey, Lilly Godwin, Faith Craig, Larkin West and Harrison Bateman. Hunter Britt and Chris Jenkins are the program’s music teachers.
The band grew and improved to the point where they are a fixture at venues such as Light Up The Arts, Orange Beach Art Fest, and the O.B. Christmas tree lighting, Gingerbread Jam, and the Visions of Christmas play. The band has also played at local restaurants.
Pittman applied for a slot in a youth music program at Disneyworld, and after a long audition tape and application process, his student band was accepted in early 2020.
“We were going to get a chance to perform at Walt Disney World and take a customized accredited class built by the head of Disney Youth Programs,’’ Pittman said. “Unfortunately, everything came to a halt when COVID-19 hit. We had to cancel our trip and Disney Youth Programs is still not quite back to what they were. We tried to pick everything back up again, then Hurricane Sally hit.’’
Although the City of Orange Beach provides significant funding to all aspects of its Expect Excellence program, this trip is considered beyond extra curricular. The trip will include stops at the Dr. Phillips Center For Performing Arts in downtown, the Walt Disney World Theater and visits to recording studios to speak with studio musicians and producers. Of course, the trip will also include a stop at Disney World for some fun team building.
Pictured: Members of the Expect Excellence Band at rehearsal.