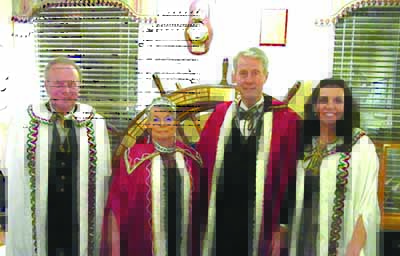 By Elaine Ciardello
The Avant Garde Military Mardi Gras Krewe starts its 36th year with an Aloha Party at the Grand Lagoon Yacht Club on September 12, 2018. Social hour starts at 6:00 P.M., dinner at 7:00 P.M. with music by South Coast DJ. Reservations are due by September 5th to Patricia Veal, Chairman at 850-698-5199 or pmv@cox.net. Our reigning King and Queen John and Marcia Sevold will greet members and guests. The Christmas Party this year will be held at the Pensacola Yacht Club on December 19th. Traditional parties in the new year include the Mardi Gras Ball at the Pensacola Yacht Club on February 15, 2019; the Parade Party on March 2, 2019 in conjunction with the Downtown Mardi Gras Parade and a membership meeting in the May/June timeframe. Membership includes active and retired members of the military and supporters of the military community. Membership dues support the functions throughout the year, so admission is free to members. Membership information may be obtained by calling Elaine Ciardello at 850-382-8009.
Pictured: Left to right, Prince Bill Clark; Queen Marcia Sevold; King John Sevold; and Princess Patty Veal.