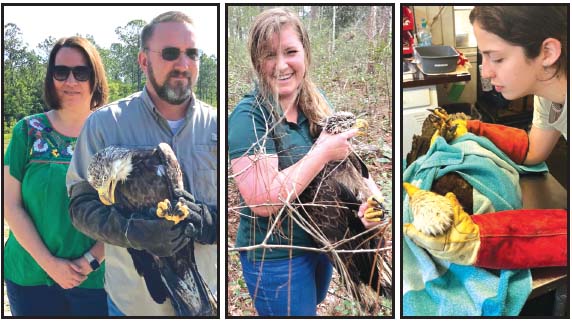 Bald Eagle Released In Orange Beach
The Orange Beach Wildlife Center, for the first time ever, has released a Bald Eagle back into the wild. An immature bald eagle a few months ago, after it was observed for several days struggling to fly. Upon intake, he/she was very thin and unable to fly, but no broken bones were shown on x-rays. Staff suspected nerve damage, and treated it with fluids, anti-inflammatories, anti-fungals, and cage rest. Its first attempts at flying we’re very poor, but it continued to gain strength and improve daily. After several months of flight conditioning, the bird was cleared for release on May 14. The OBWC staff put so much effort into rehabilitating this bird, and Gulf Shores Fire Rescue helped with the initial capture.