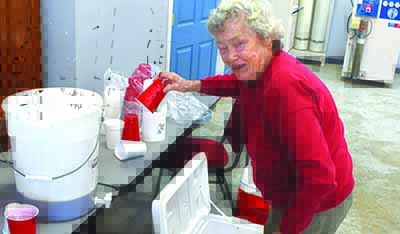 Self taught local botanist Chan West (pictured) will be the guest speaker for the Gulf Shores Garden Club’s inaugural meeting of its season on Sept. 5 at the Gulf Shores Adult Activity Center. Social time starts at 9 a.m., with the meeting commencing at 10 a.m. Guests and new members are always welcome. For more club info, call 968-5683, visit gulfshoresgardenclub.org or go to facebook.
Born and raised in Mobile, Chan was six weeks old when she first came to the property that she has since made her permanent residence, spending her childhood summers and weekends in this wonderful spot.
Following college (math major) and graduate school (physics), she married Hugh West, and raised four children as the wife of a career Army officer. She has lived near water in Wilmington, NC, Panama, Hawaii. She spent two and a half years in Guatemala and four years in Panama, learning Spanish while there.
Chan and her husband built a home adjacent to her mother’s home at the beach in 1982. Six weeks after retirement, Hugh had his first surgery for cancer and spent the next seven years battling it. During that period one of Chan’s recreations was to become a self-taught botanist specializing in beach plants.
After her husband’s death, Chan and three friends started a wildflower club that took field trips around Baldwin County to learn about tress and plants. She also became active in the Little Lagoon Preservation Society, the Ft. Morgan Civic Association, and the Christian Service Center. Active in Holy Spirit Episcopal Church, she has used her Spanish language skills on many medical and construction missions to Latin America.