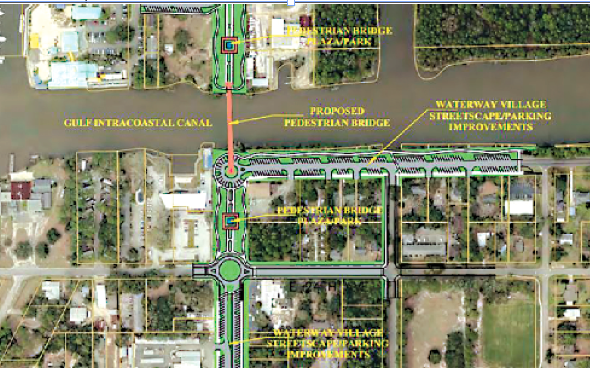 By John Mullen
The City of Gulf Shores is taking its fourth swing at a federal grant to add a third southbound lane from County Road 6, over the bridge to either Clubhouse Drive or perhaps even Fort Morgan Road.
“We will need to work that out during design,” Environmental and Grants Coordinator Dan Bond said. “Our goal is to improve capacity and efficiency as much as possible.”
Gulf Shores is seeking about $15 million from the Better Utilizing Investments to Leverage Development (BUILD) Transportation Discretionary Grant Program, a new Congressional program similar to the former Transportation Investment Generating Economic Recovery, or TIGER Discretionary Grants. The city was declined for grant money three times in that program.
Nearly $5.6 billion will be granted in nine rounds of grant issued in the BUILD program for transit, rail and port projects. Other parts of the Gulf Shores project includes a pedestrian bridge either attached to the current Intracoastal Waterway Bridge or a freestanding bridge east of Tacky Jack’s at the site of the old cantilever bridge.
“A new pedestrian bridge across the ICW would connect the north and south Waterway Village areas, adding pedestrian improvements and complete streets throughout the Waterway Village District,” Bond said.
The city’s planned $8 million match will come in the form of two projects already in the 10-year capital improvement plan. One is $4.6 million for improvements to County Road 6 to widen the roadway to accommodate more traffic from several planned large subdivisions.
Gulf Shores will also use $3.4 million to build two access roads to the medical building it bought with hopes of developing it into a freestanding emergency room. One of those intersections will be a four-way connection with State Route 59 at 34th Avenue with hopes of getting a traffic signal there as well. The other access would come south off of Cotton Creek Drive or County Road 4.
“Grants will likely be awarded in fall 2019, with final agreements executed in spring 2020,” Bond said. “Spending would likely begin on Engineering and Design in 2020, with construction starting in 2021. It is estimated the project will take five years to complete construction, with all work completed by 2026.”
During its July meeting, Gulf Shores City Council: council:
• Gave approval for the mayor and city clerk to sign a letter of support to receive a Small Community Air Service Development grant from the U.S. Department of Transportation. The federal agency is making available $12.5 million for cities to study air service and air fares in their communities. The city would be asked to provide a 3 percent match and spend no more than $14,000 on the program.
• Declared a 2006 Dodge Dakota pickup and a 2001 Polar 1796 boat with motor and trailer as surplus and donated them to the Gulf Coast Center for Ecotourism and Sustainability for use in programs at the facility.
• Appointed Councilman Joe Garris to the Coastal Alabama Business Chamber Board of Directors to replace Councilman Steve Jones who resigned. Jones was recently hired as the vice president for events and advocacy for the chamber.
• Executed a Conservation Easement between the City of Gulf Shores, McMath Properties and Community State Bank for the purpose of protecting natural, scenic and open space values of wetlands/natural areas in the Lagoon Estates Subdivision.