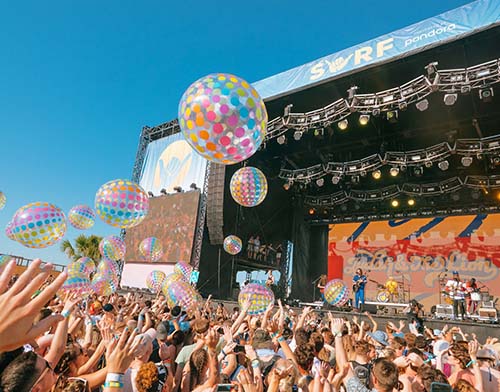 City’s contract with fest has vastly improved
How does one determine rental value of a beautiful beach?

By Fran Thompson
“Ten years ago, when we embarked on this endeavor, we wanted to create the best music festival in the world,” said Shaul Zislin, founder of Hangout Fest. “A decade later, Hangout is a bucket-list music vacation and receives accolades from fans and bands as the ultimate festival experience.”
That is true enough. The South Florida based entrepreneur’s fest is a first class, fan-centric event that is heavy on basic amenities (bathroom attendants at the portolets near the Boom-Boom Room) and offers over the top perks such as a swimming pool, hot tubs and above stage seating for those springing for VIP and Super VIP options. Best in the world is always going to be subjective when it comes to music fests. To some, the music is the experience. To others it is the people they choose to be with while partying away a late spring weekend.
That the fest has thrived in a very competitive business is a tribute to Zislin’s own genius. But just as important to the fest’s success is the locale. It is not just on the beach. It is on one of the country’s most beautiful public beaches.
Zislin’s represents owners of a majority of the parcels around Gulf Place, including a 12 unit luxury condo with 10K in first floor retail space that is about to be topped off. That certainly helps with festival logistics. His team also brilliantly lays out its site plans to take full advantage of the half-mile of public beach and promenade at its disposal.
The city rents the fest its entire public beach for at least two weeks in return for the three percent sales tax it collects on all sales inside the fest, including ticket sales. That has been a constant. The fest also pays three percent to Baldwin County and four percent to Alabama on its retail sales, just like Wal-Mart or any other retailer does.
In addition to sales tax, Gulf Shores collects special event license fees from merchandise vendors and business license fees from companies that provide services that provide everything from tents to lighting and potable water for the fest. It is a long list.
What has changed significantly is the franchise fee the fest pays on ticket sales. Before 2017, it was nonexistent – a mere $1 per year. That fee increased to one percent of gross ticket sales in 2017 and two percent the following year.
In 2019, the franchise fee increased again to three percent of ticket sales. And that will continue through the duration of the fest’s contract with the city, which goes through 2025. This means Gulf Shores collected $60 on every $1,000 VIP ticket sold in 2019.
The franchise agreement also requires that the Hangout reimburse the City for expenses occurred directly or indirectly in connection with staging the event.
Also significant is the lodging tax the city pockets from each condo and hotel room rented by festival attendees.
Although the city is not allowed to release the total amount of tax revenue collected, it is a certainty that the total is more than any other three day period of the year, including Shrimp Fest and July 4 weekend.
“Confidentiality rules prevent us from disclosing taxpayer information,’’ said Grant Brown, the city’s cultural affairs director. “The Hangout can share those numbers if they wish, but we cannot.’’