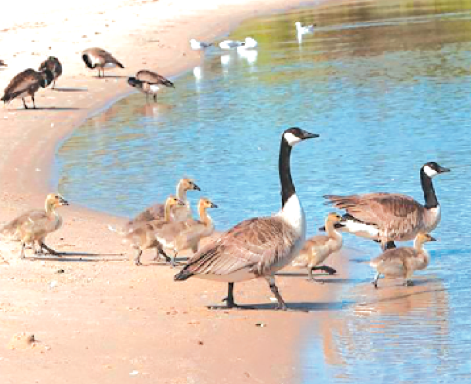 At the July 8 Fairhope City Council Work Session, a frank and sincere discussion was held concerning the unchecked population of resident Canada Geese on the City’s public lands. Several options were offered, and it is the consensus of the Mayor and Council to concentrate on three methodologies to manage the population:
• Preventing Public Feeding – this is a known issue that unfortunately has been purposely overlooked. Law and Code enforcement, is understandably, reluctant to criminalize the feeding of the waterfowl in the parks. It is hard to punish individuals for an act they consider to be helpful to the wildlife and gives them satisfaction and pleasure for the perceived helping of nature. It seems like a nice thing to do, and it’s fun to attract them closer and watch their antics, but in the long run it causes more harm than good for both bird and human.
Foods such as bread and popcorn are not ideal for waterfowl, and they can become weaker over time if they rely on these items. Regular feeding by humans causes the waterfowl stay close to their reliable food source. They are less likely to want to migrate as they should. But there are dangers to people as well. Human-dependent birds can become aggressive, and their population can increase to the point where it causes a strain on the ecosystem. In short, humans should not feed waterfowl. They can and will find their own food and increasing their dependence on people is detrimental to their well-being.
The Mayor has approved a 60-day “Notice” and “Grace” period. During this time, we will publish to our citizens on all available platforms: press, bulletin boards, everbridge, website and social media the reason why feeding of the waterfowl is detrimental and that on September 10, 2019 rigid enforcement would begin. This will require a regular presence of Law and Code.
• Hazing – active and passive: Goose ridding techniques known as hazing are more accurately described as harassment. You’re creating a climate that’s so unpleasant that the bird simply doesn’t want to live there. The hazing/harassment must be continuous and concentrated. The leading active Hazing measure is the use of trained Border Collies used to harass the geese off the property. The use of hazing dogs would be required each time the gaggle becomes too concentrated and/or numerous. Passive hazing involves rapid cycle, high-intensity LED beacons. At night, geese sleep in or near water areas where they feel secure from predators. Placing a unit into these secure areas makes the geese anxious and they will no longer consider the area “safe” and will simply move to another suitable habitat within a few days. If the geese feel insecure in an area at night, they won’t be back during the day, either. From experience, we have found the lights have a decaying hazing effect. Public Works will continue to move and place new lights to maintain the maximum effectiveness.
• Mass relocation at time of molt: Unlike other birds which will lose one feather at a time and still be able to fly, geese will lose all their flight feathers (or molt) and not be able to fly during this stage. This eclipse molt leaves the Canada Geese flightless for a three to four-week period. They cannot take flight and leave. During this time Geese are corralled, crated and transported by a Licensed Wildlife Management firm at the City’s expense to distant property that has woods, water and natural predators. Permits are required from the State and U.S. Fish and Wildlife Service for translocation activities. While the flightless waterfowl reside in this appropriate habitat, natural selection occurs due to the existence of predators. This natural process reduces the population before they regain flight and return to their former homes. This process repeated over several years will significantly reduce resident Geese populations.