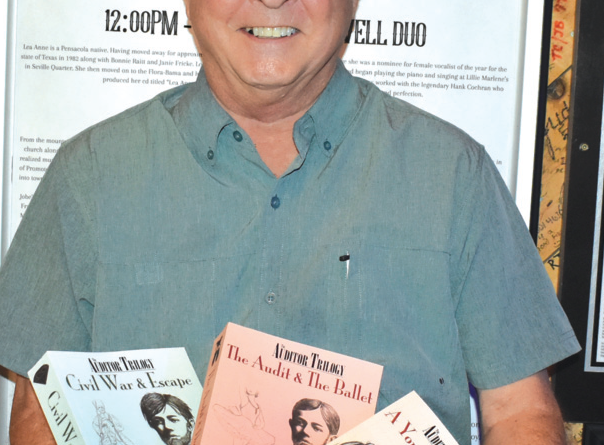 Foley resident, James (Jay) Lanius (pictured), recently published The Auditor Trilogy on Amazon and Kindle, three gritty and authentic historical fiction novels set in the early 1900s. The locations, timelines, and some of the experiences loosely follow the author’s grandfather’s life.
It’s a new century. A young man, Jim Landrum, comes of age while the world tries to cope with a new age.
The three books are self-published and are available on Amazon.com-Books and Amazon.com-Kindle. Key search words “the Auditor Trilogy” and the author’s name “James Lanius” will bring up the three books together. The paperbacks each retail for $16.95 and the eBooks each retail for $14.99. The author can be contacted by email at theauditorinfo@gmail.com.
The first book, A Young Man’s Tale, spins stories of Indians, embezzlers, worldly women, Bolsheviks, Marines, Mounties, and a soul mate. As a young homesteader, Landrum is tested in the boreal wild of Canada for a few years where he forms a picture of his life’s purpose. Soon thereafter, a worldwide manufacturer of farm equipment employs him, paving the way for a lifetime of adventure.
Canada, the West Coast, Pacific Northwest, and Alaska challenge him with tests of survival, graft, business, pitched battles, perfumed gambols and matters of the heart where his decisions and actions will determine what kind of man he will be. Along the way, wily, savvy, and sagacious women prepare him to know a soul mate when he meets her and a profound agony leads him to a more driven search for adventure and fodder for the rest of The Auditor Trilogy.
The second, The Audit & The Ballet, weaves tales of undercover missions in revolutionary Russia. The immensity of the Russian Empire, a collapsing society, and World War I, are fitting backdrops to the magnitude of his employer’s problems Landrum is next tasked with solving; smuggling out two hundred million rubles sequestered by the Tsar in Russian banks, and over five hundred Americans working inside Russia.
He copes with Siberian peasant widows, Mongolian bandits, Cossack guards, Jewish jewelers, Bolsheviks, the Finnish underground, and the perilously close death and destruction of WWI’s Eastern Front. He wrangles his way through intrigues with Romanov royalty, prima ballerinas and Petrograd’s oligarchs.
Political and social movements, and dangers percolating within societal collapse are making their marks on the fabric of life around him as he concocts schemes to succeed with his missions under the noses of the monarchy’s bureaucrats and soldiers. He ingeniously and dangerously reaches out to a despairing and starving population as the Russian Empire expires around him. He searches out the thinking, attitudes and beliefs of peasants, waitresses, nobles, oligarchs and ambassadors that collectively seem to be willing the Russian Empire toward evolution or revolution, and from monarchy to communism. Will he get the people and the money out of Russia?
The third, Civil War & Escape, plots a dangerous escape from a broken Russia with tales of war, unfettered power, destitution, Cossacks, Reds, Cheka, and Constantinople. Landrum’s journey out of post-revolution Russia is side-tracked by a surprise encounter with the central power of the new Soviet Russia. Soon thereafter, events take an ugly turn and his escape becomes a long trek hiding from the Bolshevik’s notorious secret police, the Cheka. He must survive in a world that he was never very far removed from and has now been thrown back into, painfully described medieval conditions and social anomie during post-revolution civil war and the beginnings of the Red Terror. Labeled an “Enemy of the People”, he catches on with a band of Cossacks who ride close to the earth south along the Don River. Wending their way through the thick of civil war, they deal with forgotten, desperate people living in huts, hovels, caves and nondescript villages who are coping with chaos, famine, misery and the Red Terror.
In south Russia, he is caught and beaten by the Cheka. Rescued, and with a state arrest warrant on his head, he hides for a year on a Cossack widow’s farm. Finally, in spring of 1919, chased by occupying Germans and ruthless Bolsheviks, a Navy frigate from Constantinople plucks him off the Georgian shores of the Black Sea south of Rostov-on-Don.
Back in the U.S.A., he overcomes suspicion and distrust, recuperates, and prepares for the next chapter of his life. Earth has just turned 1920, and he thirty-five.