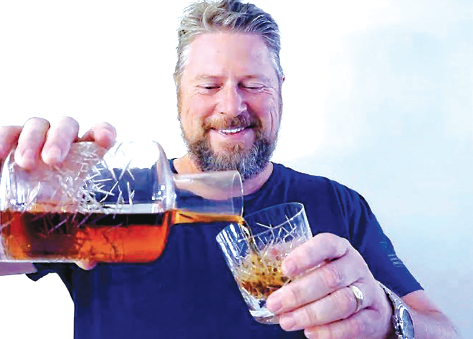 By Fran Thompson
Foley resident Michael Hinkle, retired US Navy CMDCM, has partnered with Serena Moyer, a military spouse living in the Kansas City suburbs, to create an award winning podcast, Diapers and Deployments, that dives into the life of military and veteran communities through inspiring stories about military life, transitioning out of the service, and everything in between.
“Serena was my Ombudsman onboard the USS Cheyenne when I was the Chief of the Boat. We have been friends ever since and decided to start the podcast together,’’ Hinkle said.
“I spent 31 years active duty and deployed all over the world and Serena stayed home with her children while her husband did the same,’’ he added. “We have two different views of military life. Our show is geared toward our military community, but we have listeners from all walks of life.’’
Upon retiring five years ago, after 31 years in the Navy, Hinkle, a Newtown, WV native, and his former commanding officer formed a company, SkillMil, that helps veterans find meaningful employment. His podcast is an extension of that business. The first episode aired this past January and guests have included Robert Patrick (T-1000 from Terminator), and musicians Shannon Book and Travis Marvin.
Diapers & Deployments has listeners in 10 countries and has already garnered industry awards that include Veteran Business Podcast of the Year, Navy Podcast of the Year and Overall Veteran Podcast of the Year.
Hinkle had never even been to Foley when he was appointed Command Master Chief at Naval Hospital Pensacola in 2014. But he now has roots there.
One of his daughters, Mikayla, a 2017 Foley High grad, returned home to open a business, Events by Rainea, after graduating from Auburn. His daughter Skylar is a junior at Elberta High.
“I purchased my current home online from Hawaii and did not visit Foley until a few weeks after I had already purchased it,’’ he said. “I found Foley by accident and love it here. We now have our roots in Foley. We will be here a long time.’’
The podcast hosts do not discuss politics or religion, but they do not avoid other controversial subjects that affect military families.
“I think one episode that got some attention was the Shannon Book episode,’’ Hinkle said. “He is a Navy veteran and his music has a lot of real emotion from his time in combat. All of the money from his song “Not Alone” goes to help organizations that fight veteran suicide.’’
The podcast can be accessed through skillmil.com, and listeners can also find it on Spotify, Apple and IHeartRadio.