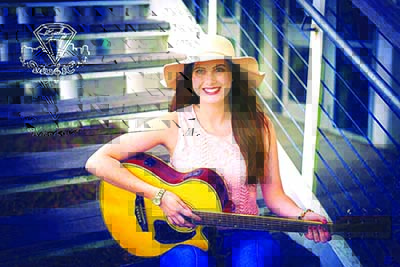 The stage will be set a earlier than usual at The Office when Kaitlin Jewell Music brings its swamp rock sound from the Mississippi Gulf Coast (Necaise to be exact) to Foley for a 5 p.m. show on June 27 at that popular bistro at 122 County Rd. 20 (251-970-0043).
“You don’t want to miss this amazing band from Mississippi,’’ said Debra Slaughter of The Office about the six piece outfit (including sax) that will command The Office’s expansive stage.
Self described as “just a small town girl with big city dreams,’’ the band’s name sake, Kaitlin Jewell (pictured), has played an acoustic set in Gulf Shores before, but this is her first time playing over here with a full band.
She said the band has been together for more than two years and plays a variety of genres ranging from country and swamp pop to southern rock. She added that it is the band’s 80’s rock covers, especially Journey, that get the audience on its feet.
“But I love to play anything and everything,’’ she said. “I don’t really have a specific song. I love them all.
“I’ve always sang in school and at church, talent shows and different things, but around two years ago I decided I wanted to branch out and start a band of my own,’’ she added.
The band plays regularly in and around Bay St. Louis, but this will be their first time on the road, said Kaitlin, who released one self titled EP in 2017 and has a second EP of original music due for release later this year.
“This is our first time to venture out of Mississipi and we are very excited about it,’’ she said.

Related ItemsJune 17 News
← Previous Story Mullet Toss Weekend is postponed, not cancelled
Next Story → Weekday pickleball is back at Church of Christ in Gulf Shores