Home / CV / Lack of traffic on Canal Rd. a plus for road crews

Lack of traffic on Canal Rd. a plus for road crews 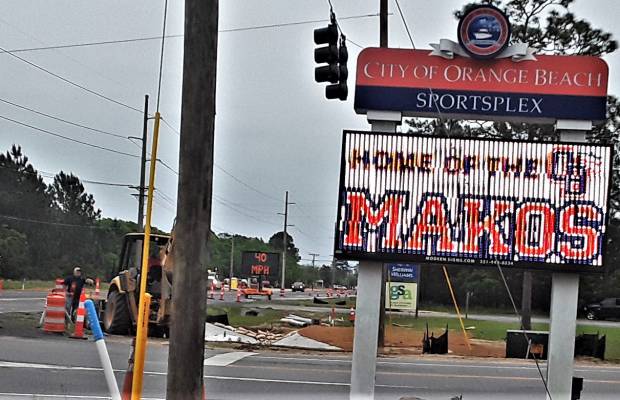 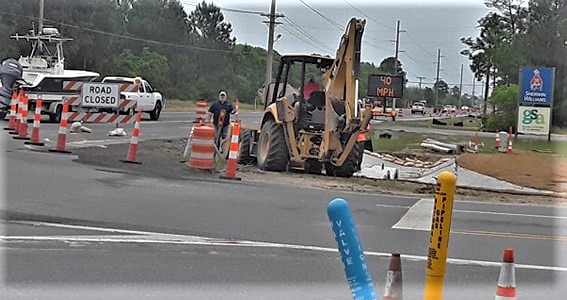 Lack of traffic on Canal Rd. a plus for road crews
Not that anybody in Orange Beach (or the world) sees the quarantine as a blessing, but the coronavirus has made work easier and more safe for road crews working on the five year project that will result in the five-laning of Canal Road when complete.
“The nice thing even though it’s difficult for businesses and for our community its excellent for the roadwork. They’ve made some good headway and to get the milling done before the summer without the traffic has been an advantage for the project,” said O.B. Community Development Director Kit Alexander.
The milling work is mostly complete on the north side of the road from near Alabama 161 to William Silvers Parkway. The timetable for completion is still intact. The Alabama Department of Transportation has said the completion date for the project is December of 2020. Crews are now working to mill the pavement on the south side of the road from west to east to get the required width for five full lanes.
During the council’s dual regular and work session on April 21, Councilman Jeff Silvers said with much of the milling complete he’s been fielding questions about how long the road will remain unpaved.
“People are asking how long they are going to have to drive through the rumbled grooves and stuff like that,” Silvers said.
Alexander said it could be quite some time before the paving begins on any of the new road. “They’ve still got a little bit of milling to do and then they will start working this week on the south side of the road before they do the final paving,” Alexander said. “They’ll pave the whole road once it’s completed.”
Temporary striping is on the milled part of the roadway and includes other improvements that have been missing in past projects.
“We’ve had problems previously with the temporary striping not being reflective,” Alexander said. “In rain and during dark hours it’s been hard to see the lane demarcations so they are putting in those reflective pavement markets in at the request of the city. I can also say they volunteered to provide those in response to complaints from the city. It’ll be better than past state projects where we’ve had that difficulty.”
The council met virtually for the second straight session and plans are to continue digital meetings as long as pandemic restrictions are in place. The meeting lasted less than 13 minutes.
During the regular session, the council:
• Awarded the bid for the Adult Fitness Center to Stuart Construction for about $2.9 million.
• Passed a resolution declaring a police vehicle light bar owned by the City of Orange Beach as surplus and unneeded and authorizing donating the bar to Elberta.
• Passed a resolution authorizing the execution of an agreement with Harbor Communications to installing fiber at the Sportsplex.
• Passed a resolution authorizing execution of a software service renewal agreement for art jury processing with Zapp Software.
• During the work session, the council discussed:
• Three resolutions for professional services agreement and a contract with Moffatt & Nichol to implement the Lower Perdido Bay/Perdido Pass Navigation Project Hydrological Modeling and Sediment Budget Study not to exceed $365,000. Moffatt & Nichol will also provide a Restoration Alternatives Analysis and Design of Lower Perdido Bay/Perdido Pass for $413,822.
• Setting two public hearings, one for a 14-lot subdivision Robinson Grove on Terry Cove east of Walker Key and six four-bedroom homes in Cypress Village Courtyard. Both were rescheduled for May 5 pending status of pandemic restrictions.
• Heard a first reading on a new a parking deck east of Turquoise Place to take overflow parking. Cars now must park across the street and drivers have to brave crossing five-lane Perdido Beach Boulevard to reach the condo towers. The applicants want an extension of the planned unit development through Sept. 30, 2021. That public hearing is also tentatively scheduled for May 5 but will be subject to be delayed again if pandemic restrictions are still in place.