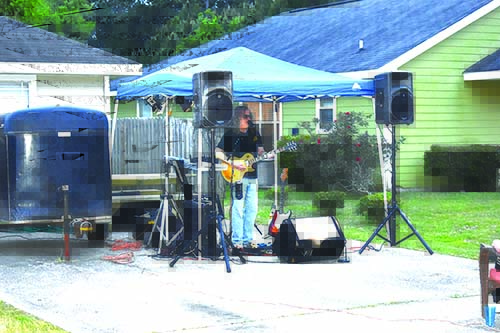 Les Linton is living the life he chose in “Blue Collar Paradise”
By Fran Thompson
It’s a story you often hear associated with the first time the Beatles played live on the Ed Sullivan Show. It’s that moment when a young man (or woman) looks upon a stage and decides he wants to be that guitar player or that frontman. He wants to wear cool clothes and get lots of attention form girls. He wants to rock!
For Gulf Shores’ musical mainstay Les Linton, it was a concert on the campus of Southern Miss in Hattiesburg, about 250 miles south of his hometown, Oxford.
Les was only 13. And the act on stage was Gino Vanelli.
“I grew up in a house with a bunch of kids. So I picked up on all kinds of music from my older brothers before I was even hip to it,’’ Les said. “But the musicianship of that band was incredible. I wish I had a live version of that concert.’’
Les has had other jobs, including running a local zipline. He sold cars (he has a brother in the business) after Hurricane Ivan. But mostly he has made a living playing or teaching music.
“I knew ever since that concert. Ever since I was a little kid that this is what I wanted to do,’’ Les said from the front porch of his home on East 21st St. in Gulf Shores. “I can remember telling my dad that. he said that I must love adversity.’’
The more popular bands with whom Les has played bass guitar include Coast To Coast and Frontrunner. Both were part of the SEC Frathouse circuit and toured Atlantic Coast Southern Resort towns. Those Mobile based bands often stayed on the road for two months.
Another of his bands, Mr. X, was also known for its musicianship, especially George Eberlein’s guitar handiwork. But that band’s effect on his life was even more substantial. It allowed him the opportunity to wow his future wife, Nina.
“We recruited her to sing with Mr X in 1992,’’ Les said. “I remember the first time I kissed her on the lips. It was electric. We had a secret affair at first. She’s been with me in hard times and good ever since.’’
Gulf Shores was a tour stop for all of his bands. And Les made quick friends while jamming with players such as Brent Burns, J.R. Owen and the late Shine Powell at local dives like Margaritaville.
“I actually started playing in Mr. X so I could spend less time on the road,’’ Les said about the band that spawned a Sunday afternoon tradition that at one time ranked up there with the ‘Bama, The Gulfgate and Judge Roy Bean’s.
Les and Stephen Harrison, the Mr. X frontman, played at the Pink Pony every Sunday afternoon for a solid 10 years. Even more than Mr. X, that duo was able to spur sales of Yeagermeister to a level that is still legendary among barkeeps and at the ABC. Thankful Jaegemeister reps even provided swag to pass out at shows.
“Club owners would tell us they sold an extra six bottles of Jaeger when Mr. X played. So the company gave us all these toys,’’ Les said.
Les’s father was a preacher and a carpenter. But he also picked. One of his sisters plays piano. Daughter Alex held the first chair in clarinet and was a drum major in the University of South Alabama band. She also plays keyboards, guitar and sings. His 18 year old son, Aaron, just graduated from GSHS and plays drums and guitar.
Les was close to Aaron’s age when he was invited to audition for The Mississippians, a band sponsored by the University of Mississippi in his hometown. He said he only missed one practice and no gigs in his two years playing bass with that band.
These says, Les plays so often at its three locations, that he considers himself part of the Tacky Jacks family. He’s also had a gig at the Grand Hotel for 13 years and plays regularly at Mudbugs.
He’s had stints with the Levee Band out of New Orleans and the Hurricane Horns. Yet he said his four years playing blues with the late Larry T. Wilson in Big Muddy are among his fondest musical memories. He and drummer TK Lively scheduled Big Muddy jams between their shows as a duo with the Soul Food Junkies.
Les has had some memorable nights on stage across the Gulf Coast with his musical peers. He was part of a tribute to the late bluesman Hank Becker with Wet Willie at Bayfest. He gigged with John Anthony at the Lumberyard and played all-star shows at The Blues Tavern and Veets.
But it being able to make a living playing music in and around his home community is what he is most proud of. And he is quick to mention the support from his hometown when discussing health issues that slowed him down in the past.
“Everyone was so loyal and willing to help me in the hard times,’’ he said. “And I am very grateful to the business owners and fans for holding me up. I don’t know if there is any place else in the world like this. I know there is no other place I’d like to be.’’
Although he is mostly playing solo this summer, Les has succeeded in living out the epiphany that hit him during that Gino Vanelli concert many years ago.
“I think success is being able to continue to do what you love doing,’’ he said.