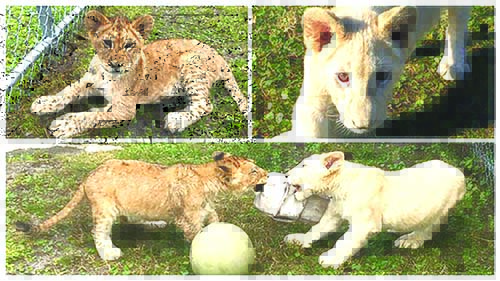 Lion Cubs Arrive at the Alabama Gulf Coast Zoo
The Alabama Gulf Coast Zoo is excited to announce the arrival of two four month old lion cubs, Jabari, a male, rare white lion cub and Nandi, a female tawny lion cub. Jabari means “all powerful ruler” and Nandi is named after a brave Zulu queen. A beloved zoo supporter who wishes to remain anonymous gifted the cubs to the zoo. There are fewer than 300 white lions in captivity and even less in the wild. They are not albinos but leucistic, a rare genetic occurrence where a recessive gene causes the lion’s coat to vary from near white to blonde, rather than the common tawny. They are the same subspecies as the tawny South African lion, white lions are found in the Timbavati Region of South Africa. Encounters will not be offered with these feisty two. Although they can be seen daily at various times, weather permitting, roughhousing and playing with each other in their habitat. Info: 251-968-5732 or alabamagulfcoastzoo.com. The zoo (until the end of the 2019 tourist season) is located in downtown Gulf Shores, 1204 Gulf Shores Pkwy.