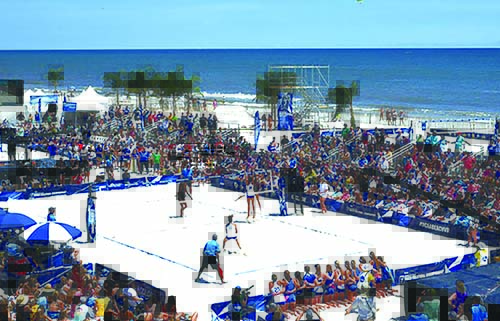 A volleyball lifer as a coach and administrator, Bryant said he had to first assure people that Alabama had beaches when he started organizing tourneys on the sand here.
He said Gulf Shores City Services helped assemble eight beach volleyball courts for a tourney back in 2004. There are now eight permanent courts at the beach.
The first USAV Gulf Coast Region Beach National Qualifier drew a couple dozen teams. There will be more than 50 courts at the public beach for this weekend’s national qualifier, and the 480 teams will come from all over the country to play matches on those courts.
“Right now it is the largest national qualifier in the nation for beach volleyball,’’ said Weaver.
Bryant said that even though the championship is moving to Huntington Beach for two years after the 2024 championships here, he expects a more permanent return to Pleasure Island.
“The NCAA wants to advertise the sport in the California market, but (USC coach) Donna Collier said that she can’t get her girls fired up to go to Huntington Beach, but she can get them fired up by saying, ‘let’s go win a championship in Gulf Shores.’’’
“Just think of it,’’ he added. “The NCAA Championship is here just by the virtue of Kathy DeBoer looking for a place that would be passionate about the event.’’
Beach volleyball easily made the quickest transition from emerging sport to championship sport in NCAA history. It’s the fastest growing NCAA sport over the last five years in Division I.
DeBoer saw it coming back in 2017 when she told Lee Feinswog of VolleyballMag.com that beach volleyball’s growth would skyrocket.
“Beach went from zero programs to 53 in Division I in six years. There’s not an NCAA sport on record that’s picked up 50 Division I programs in six years. The next closest sport was like 17 years to pick up 50 new programs,’’ she said.
Bryant said he can still picture coach Matthies speaking at the NCAA volleyball convention about standing on her Phoenix Suites condo balcony looking at row after row of volleyball courts a few hundred yards west of the college championship courts on the crystal white Gulf Shores beach at sunrise.
“There were a lot of factors involved, and it’s a good story about a sport that is going to keep growing,’’ Bryant said. “This is something that was born on this island with 11 teams. And we are looking to do for the men what we did for the women.”
Don’t bet against that happening. More than participants than ever at the last High Performance Beach Tryouts at Gulf Shores Public Beach were boys than ever before.