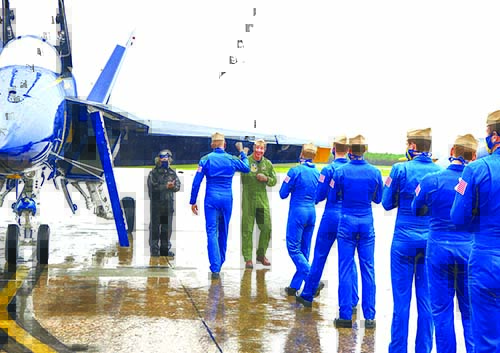 The world famous and Pensacola Naval Air Station based Blue Angels flight demonstration team received the first of what will be a total of 18 Super Hornets to replace its existing F/A-18 Hornets on July 27. The remaining jets will arrive at Sherman Field by the end of the year.
Navy Captain Eric Doyle, the Director of the Blue Angels Super Hornet Transition Team, flew the jet from Boeing’s facilities in Jacksonville to Naval Air Station Pensacola on July 27. The team has flown F/A018 Hornets for the past 34 years. “We would like to especially thank the teams at Boeing, Chief of Naval Air Training Command, Naval Air Systems Command, Fleet Readiness Center Southeast, and Naval Supply Systems Command Weapons Systems Support,” said Cmdr. Brian Kesselring, commanding officer and flight leader of the Blue Angels. “The success of this mission was a direct reflection of their hard work.”
“Acquiring our first Super Hornet is a momentous step in our inevitable transition scheduled for later this year and it required a herculean effort to get these fleet jets ready for our team,” Cmdr. Kesselring added.
The U.S. Navy made the decision to transition the Blue Angels to the Super Hornet in 2018, signing a $17 million contract with Boeing to convert nine F/A-18E and two F/A-18F aircraft into the Blue Angel configuration. According to a company press release, the team has flown Boeing aircraft for more than 50 years, starting with the F-4J Phantom II in 1969.
The Blue Angels are also in the midst of test flights with the new Fat Albert, former Royal Air Force Hercules C5 ZH885, which was refurbished at Cambridge Airport.
The November 16-17 Blue Angels Homecoming Show at Pensacola NAS has not been cancelled, but it is possible that the Blues will perform without a center spot, which will give fans sightlines from Pensacola Beach to Orange Beach.
The Blues performed its first flight demonstration on June 15, 1946. The team shifted its home base to Pensacola in 1949.
Pictured: Capt. Eric Doyle, Director of the Blue Angels Super Hornet Transition Team, departs Boeing Cecil field for Naval Air Station Pensacola, in the first Blue Angels F/A-18 Super Hornet. Cmdr. Brian Kesselring, current Blue Angels commanding officer, and his team accept the new plane from Capt. Doyle. (Photo: U.S. Navy Blue Angels)