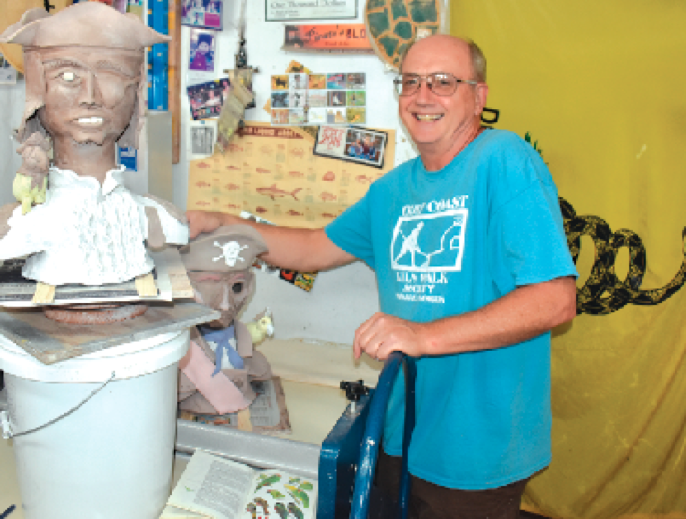 By Eloise Thomley
A rained out October 10 Art Crawl was a great disappointment for artists and visitors, but, not to worry! The Waterway Village Art Crawl has been rescheduled and will be held October 24 in Gulf Shores.
Local artists will be set up on the following properties: Acme Oyster House; Big Beach Brewing; Blue Girl Beading; Gulf Coast Arts Alliance; Pottery Central; Rick Tino Fine Art and Frames
Visitors can walk from one place to another between 10: a.m. until 5 pm and enjoy some of the best original art in Coastal Alabama. Local artists have been suffering as all have during COVID and hurricane economy downturns. Your support of them will be very much appreciated
So, make plans to stroll around Waterway Village and enjoy the day on October 24 and choose some great original gifts for Christmas or just for you. Your smiling faces will make all the difference in the world!
Pictured: Steve Dark of Pottery Central has been a working artist based in Gulf Shores for more than 30 years. Best known for his humorous, funky, unique busts, he also creates functional art in the way of mugs, bowls, cups, planters, bird baths and ceramic shells that can be used spoon trays or to bake oysters. But it is the often humorous and sometimes somber or even grotesque faces he sculpts that define him. He most often works on a series of around eight pieces simultaniously. And in each piece you can see a bit of Steve’s soul and wanderlust. He creates his busts by combining as many as six separate pieces, which he throws on the potter’s wheel and assembles, colors, textures, glazes and cures. One of his most popular series of busts are the submergable busts that he makes for patrons to place in local waters. The hula girls, swimmers or busts Their looks change with the tides, and after a couple of years, barnacles build up on them like the fishing reefs that help define the Alabama Gulf Coast among anglers.
Pottery Central World Headquarters is located at 2417 East Second St. in Waterway Village.