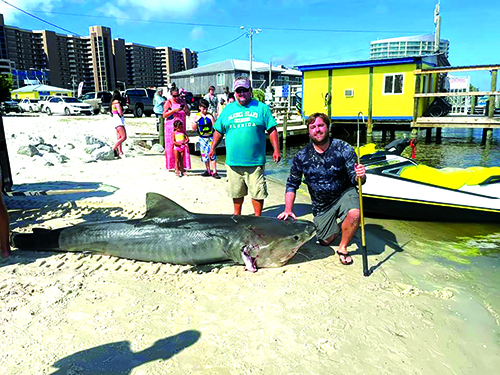 By David Thornton
This year’s Alabama Deep Sea Fishing Rodeo was monumental, as the shark category returned for anglers. The largest Tiger shark weighed was 138 inches long (11 ½ feet), and had a girth of 5 feet, as confirmed by asst. rodeo judge Dr. Marcus Drymon.
James “Jamie” Mullek Russell was the angler who brought it to the scales. Quite literally, because he drove it in a truck, across the Mobile Bay Ferry from the Flora-Bama Marina dock in Orange Beach. That is where his father Captain Ritchie Russell (known as “the shark whisperer”) berths his boat ‘Miss Cayman’ from which the shark was caught.
They had to beach the behemoth and use a backhoe to load it in the back of a pickup truck for the drive to the ADSFR weigh-in on Dauphin Island. It garnered plenty of attention along the way, especially from folks on the ferry ride across the bay. Jamie said the kids especially were all asking to jump in the bed of the truck to get their pictures taken with such a large shark. Likely the biggest most will see in their lifetime! At the ADSFR, Russell was directed through the gate and crowd of onlookers, where they weighed the shark right off the back of the truck. A fitting bit of drama for the largest fish weighed in!
That beast was quite a contrast though, from what Russell considers ‘his greatest catch yet’. That would be when his wife Alexis gave birth to their beautiful 6 pound 1 ounce daughter Katherine Ann earlier this month. In fact these ladies in his life played a pivotal role in Russell even being able to catch the shark in the first place.
On Saturday, a while after Jamie had taken off work to look after their daughter, Alexis insisted it would be OK for him to go fishing with his dad for a bit. Turned out that was all he needed once the huge shark was hooked, fought, subdued and brought to the dock. And now Russell can surely treat his girls like queens on his $12,000 winnings from the rodeo!