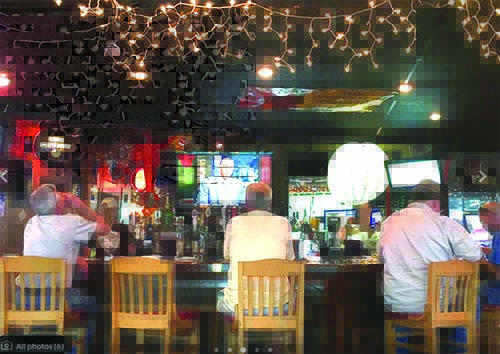 Golf, and more specifically the PGA Phoenix Open, was on the TVs at The Undertow and the minds of owner Sanford McLain and his loyal patrons last weekend. Specifically McLain, who opened the popular locals bistro on Canal Rd. in Orange Beach 13 years back, had a vested interest in how well Nate Lashley, Billy Horschel and Jordan Spieth played in the tourney.
The Undertow was one of 20 business customers from throughout the country randomly selected by Waste Management Inc. to participate in a contest that was worth $100,000 to the winner. Only 20 of Waste Management’s hundreds of thousands of accounts across the country were selected to participate in the contest. And it was random.
Each of the 20 businesses was assigned three golfers. The businesses whose three golfers garnered the best total score would earn $100,000 for the Waste Management account they represented.
In addition, if any player was able to score a hole in one on the 16th hole, the business that golfer was representing would win $1 million. All 20 finalists received free Waste Management Inc. services for a year.
“When they first called, I thought it was somebody trying to sell me something,’’ McLain said. “But to be one of only 20 among the hundreds of thousands of accounts they had to draw from was pretty cool. Waste Management regional people came down and shot a video in case I won.’’
Thinking it might jinx his chances, McLain said at first he did not share news of the contest with his customers. But when his team entered the tourney’s final day in second place, he posted info about it on social media. That created a sudden interest in birdies and bogies among his clientele.
“It would have been incredible if we had won, but it was still fun, and I got a free year of service,’’ McLain said. “They also gave me a Waste Management hat.’’
Located at 25025 Canal Rd. in Orange Beach, the Undertow (251-981-3331) features live music at least three nights a week and karaoke on other nights. OB Vapors is located in the front of the business. Afficionados of bar food have always given high marks to its hamburgers and wings. Its weekend special – all-you-can-eat Royal Red Shrimp, potatoes, corn, and sausage for only $10 – is easily among the best food values on the island. The feast is served buffet style every Saturday and Sunday beginning at 2 p.m.