ALDOT will take bids on 2nd G.S. Intracoastal Bridge May 28 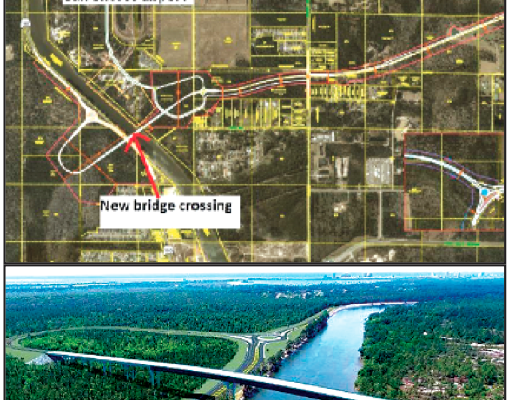 ALDOT will take bids on 2nd G.S. Intracoastal Bridge May 28
The final piece needed for clearance to build a bridge over the Intracoastal Waterway to Canal Road in east Gulf Shores has been cleared, Southwest Region Assistant Engineer Brian Aaron of the Alabama Department of Transportation said.
“ALDOT has the (U.S. Army Corps of Engineer) permit in hand,” Aaron said. “There are no more hurdles to clear from permitting standpoint.”
Aaron said the plan is to build the bridge first and then bid out the work for the spur from the Beach Express to Cotton Creek Drive in Gulf Shores.
“The bridge is still planned and ALDOT is scheduled to take bids May 28,” Aaron said. “Assuming a fair bid is accepted, work should start in August.”
This portion of the work would include a roundabout on Canal Road at the south landing point of the new bridge. Aaron said the bridge part of the project would take “roughly two years” to complete.
There is no date scheduled for accepting bids for the spur road but plans are continuing, Aaron said.
“The project is still moving forward,” Aaron said. “The city property is the last tract to clear on the roadway portion between the Beach Express and County Road 4. All of rights of way have been acquired.”
The first agenda for the April 19 Gulf Shores City Council work session contained an item relinquishing rights of way to the state for the Beach Express to Cotton Creek Drive for the spur. It was pulled from the agenda before the meeting to clarify some map issues with ALDOT, City Engineer Mark Acreman said.
The waiver of rights to appraisal and just compensation, when it occurs, will to convey 26.37 acres of public rights-of-way to ALDOT for the purposes of the construction a public roadway.
Part of the new road the state is planning from the Beach Express to Cotton Creek will cross the city’s future education campus at the Beach Express and Coastal Gateway Boulevard.
Plans for this long-delayed project include connecting to Waterway Village Boulevard East and the bridge across the Intracoastal Waterway near the Orange Beach Water Authority’s treatment plant.