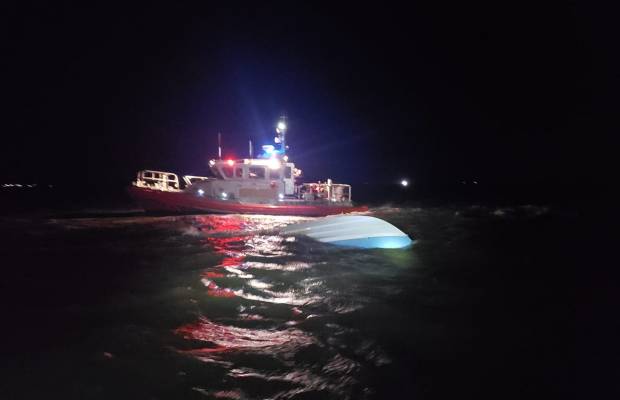 Baldwin 911 directions help Bon Secour VFD rescue boaters
After being pointed in the right direction by Baldwin County 911, firefighters from Bon Secour Volunteer Fire Department and the U.S. Coast Guard rescued six boaters in the water next to their capsized vessel in Mobile Bay around 11 p.m. on Saturday evening (April 25).
The boat capsized north of Fort Morgan and west of Oyster Bay.
Six boaters were in the water next to a capsized 22-foot SeaPro boat. Five of the six occupants were wearing life jackets and the 6th was holding on to a cooler to stay afloat.
“This was a very big team effort with a huge positive outcome. The situation could have had a much worse outcome,’’ reported Bon Secour VFD. “Big Thank You to Baldwin County 911 for the dispatchers handling this call and pinpointing the location of the callers and relaying all the details necessary to locate the patients.’’
Pictured: Six boaters were on a boat that capsized in Mobile Bay orth of Fort Morgan and west of Oyster Bay.