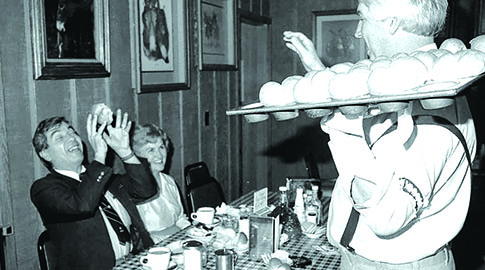 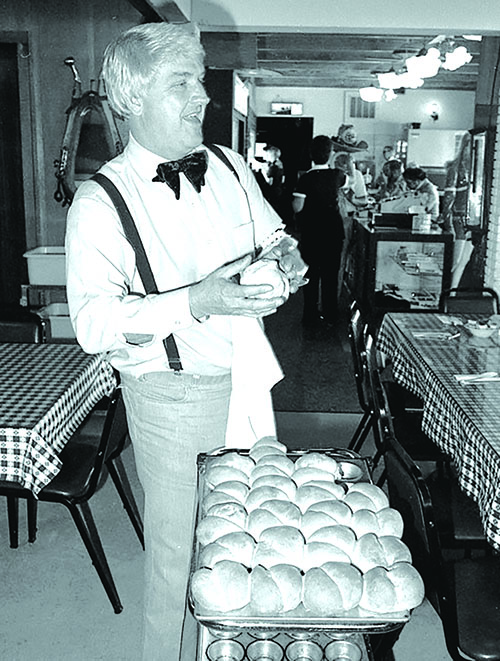 It’s so ingrained in Lambert’s brand that the Foley restaurant’s website is throwedrolls.com.
But the challenge of cleanly getting your mitts around a doughy projectile is not the main reason people line up to enter more than an hour before it opens.
Lambert’s is celebrating its 25th anniversary as a Foley institution because the food is good, the portions are generous, the atmosphere is unique and the servers are friendly.
Besides, Lambert’s was a thriving family business before Norman Lambert pitched his first roll in 1976.
Still, seeing paid professionals do something that children would be punished for if they did it at home never gets old.
It is often noted that Norman was a natural for the head tosser’s job, as he retired as the football coach of his hometown Sikeston Bulldogs to enter the family business.
There are several recorded postings of the tossed roll legend.
The company website states: “One day it was really busy and when Norman couldn’t get through the crowd to refill roll baskets. A waiting customers told him to “throw the D*** Thing,” and the Home of Throwed Rolls was born.’’
Here is how Norman put it a few years later: “I started throwing rolls about four years ago when we were in our old cafe. It was too crowded one noon for me to serve the rolls to a customer and somebody yelled, ‘Throw em.’ So I threw them. So, now I do that about every noon meal and during the evenings too. The rolls are fresh, right out of the oven.”
At the current rate of consumption, a year’s supply of Lambert’s baked rolls laid side by side would measure 177.27 miles. Its three restaurants sell 2,246,400 individual rolls per day between them, most eaten with real butter or country sorghum molasses.
“There are a lot of different stories. But everybody wanted him to do it and it got popular,’’ said Craig Jackson, general manager of operations in Foley from the beginning. Jackson is from Sikeston and knew the Lambert family before he started working for them while still in college.
Lambert’s first opened for business right in the middle of World War II, in 1942 by Earl and Agnes Lambert. The couple was assisted by Earl’s brother Robert, and Robert’s wife, Ruby. A plate lunch – meat, three vegetables, rolls and beverage – sold for about 65 cents at the time.
Sharecroppers who later worked at the International Shoe Company in Sikeston, the Lamberts borrowed $1,500 to open their first cafe in March of 1942.
Times were tough in those early years. But Earl always offered plenty of food at a reasonable price, and business prospered as the population increased along the hub where the restaurant was built. The original Lambert’s had a 9-stool counter and eight tables for a total seating capacity of 41. With rationing in place, some days the restaurant went without meat. Earl and Agnes worked 12-hour shifts and kept the café open twenty-four hours a day.
The hometown Lambert’s is now on its fourth rebuild, the ultimate tribute to the restaurant’s popularity.
Norman, a teacher at Sikeston High School, also coached wrestling and track. He was already a busy man. But he made no bones when he entered the family business that his parents had a work ethic that was hard to match.
“I’m not as dedicated as my parents. They probably worked 16 hours a day, seven days a week,” he said at the time.
The roll tossing tradition continued when a second Lambert’s opened in Ozark, near Branson, Missouri.
The company founder, Earl Lambert, passed away in 1976, but he left it to his family to carry on the Lambert’s legacy: “We do simple things, but in exceptional ways!”
None other than the king of rock ‘n roll, Elvis Presley, has eaten at Lambert’s. So have Bobby Knight, Jay Leno, Morgan Freemen, Tanya Tucker, Ray Stevens, Tammy Wynette, Stan Musial, Clint Eastwood, Kyle Petty, Brad Paisley, Miranda Lambert, Blake Shelton and Waylon Jennings.
The Lambert’s atmosphere is part of its charm: Huge signage above the front porch, murals on the outside walls, yellow foot prints on the floors, a collection of period paraphernalia, donkey memorabilia, funky & junky pictures, flags, license plates, models, bird houses, even an antique wheel chair.
Meet & Threes are still popular, as is fried shrimp, chicken and catfish, pork chops, and pass around veggies like onion fried potatoes, fried okra, boiled cabbage, macaroni & tomatoes, and black-eyed peas.
When Lambert’s opened eight miles north of Gulf Shores, it did not share an intersection with Office Depot, Lowe’s, Home Depot and a few of the area’s favorite fast food dispensaries.
Jackson said other than car dealerships and Tanger Outlet Center (It was the Riviera Center back then), there was not much activity south of County Rd 26 in Foley.
County Rd. 20 was only two lanes, and the restaurant was two feet higher than the road. It is now two feet lower.
The reason Agnes and Earl Lambert decided to build a third Lambert’s restaurant in Baldwin County is simple. They liked the area and used to vacation here often. They trusted their instincts rather than population projection charts and building trends.
“I was already working within the system. I said I would like to come down and check it out. So did a few others. Some stayed and some didn’t,’’ said Jackson.
Although the neighborhood has changed dramatically, Lambert’s brand has remained constant, which is to say, consistant. They can accommodate church congregations in buses or baseball teams in multiple SUVs with a seating capacity that is right at 500.
“We treat everybody like they want to be treated, and if you can do that, you will do pretty well. But most people in retail will tell you that,’’ said Jackson.
“We try to provide value, and we do what we can to make it affordable for families.
“And we’re going to throw rolls,” added Jackson. “That’s what we do.’’