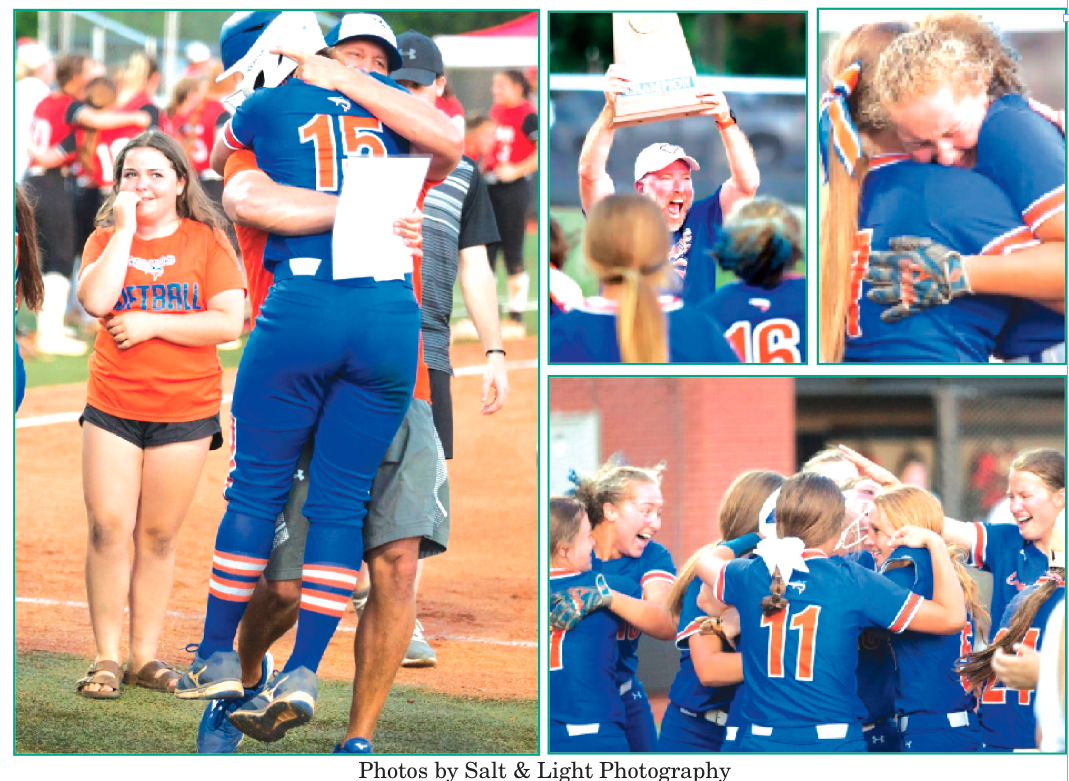 Makos make history by ending first year with a state championship
“Leave it to the kids to lift up our community,’’ said Marc Anderson, whose job with the City of Orange Beach includes editing the city newsletter.
“From Hurricane Sally to softball-sized hail, we’ve been battered to say the least over the past eight months. All of that extra weight got much lighter thanks to a group of young, determined and resilient student-athletes who took the AHSAA 2A State Softball Championship tournament by storm this week. They are shining stars for our city.’’
John Mullen, the Mullet Wrapper’s reporter/delivery guy, added that when you are witness to a story like this, “make sure you don’t mess it up. This is a special story. ’’
Orange Beach High School, fielding its first ever varsity softball team, went to Oxford and stunned Pisgah 3-2 to claim the Class 2A state title at Signature Field at Choccolocco Park on May 20.
The Makos won with a phenomenal group of girls who were also phenomenally young – two 11th-graders, one 10th-grader and the rest seventh through ninth-graders. The team included seven players who are still in middle school.
You read that correctly. There were no seniors on the Mako team that was the first ever to win a high school state championship in Alabama in its first year as a school. In fact, Orange Beach High School will not even welcome its first group of 12th graders until this fall.
Orange Beach’s championship game win was as dramatic as it was unlikely considering that the team and the high school did not exist in 2019.
With her team down 2-1 in the bottom of the ninth inning, seventh-grader Ava Hodo fulfilled every player’s field of dreams by hitting a walk-off, two-run home run to win a championship. From the crack of the bat, there was no doubt that Hodo’s line drive was going the distance. Daigle Wilson, who had walked in front of her, was responsible for the other winning run.
“This is awesome,” Hodo told al.com after scoring Wilson with her bomb. “I just wanted to hit a line drive to get my team going and start something. To get a walk-off, it’s something you dream about.
“I’m so excited. I’m just over the moon. At the first of the year, Coach [Shane Alexander] told us he was going to throw us in the deep end to see if we could swim. It turns out we really could. I know this is the best feeling ever. It’s something I’ll never forget.”
The Makos scored a run in the opening inning when MVP Teagan Revette walked, stole second and scored on a passed ball. The Eagles put together two hits to tie the game at 1-1 in the second.
Eighth-grader Justine Henderson got the win on the mound, holding off a powerful Pisgah team. Leading up to the championship, Henderson pitched three complete games, beating Sumiton Christian 6-4, and Spring Garden 3-1. The Makos and Henderson then avenged a regional loss to 2A defending champion G.W. Long with a convincing 7-1 win.
Hodo, Henderson and Revette were named to the all-tournament team.
The Orange Beach community turned out to welcome the police-escorted team bus back home on May 21.
“Just so you know, this group went undefeated. They beat the defending 2A state champion and the defending 3A state champion to bring home the blue map to Orange Beach, Alabama,’’ said Principal Dr. Robbie Smith at the welcome reception.
“It don’t get any better than that. This school wouldn’t be possible without Mayor (Tony) Kennon and our City Council in a perfect combination with Baldwin County schools. We have been able to accomplish what no one else has before. We have won a state title as a first-year program. Never happened before.”
Coach Alexander also won a softball championship at Hartselle and has a baseball title on his resume as well.
“I don’t know what to say,” said Alexander, per al.com. “We’ve had such great support in the community. It’s really unbelievable to bring this back to Orange Beach. There might be a party or two in Orange Beach this weekend. I can promise you that.”
Pisgah won five straight titles from 2001-05, and also won state championships in 2008, 2011, 2013, 2017 and 2019. Most of the Eagles’ titles were in Class 3A.
“Really, I don’t have the words,” Alexander added. “I love these girls. They’ve battled all year and done everything I’ve asked of them. When we started the season, we really challenged them. We took them to big tournaments and challenged the big 7A and 6A schools, and they never backed down.’’
“We set our goals just to get here. We were excited just to get here. But then once we got here, then we started thinking, ‘Why not us?’ It’s phenomenal.”
O.B. Mayor Tony Kennon said the softball team has now set the standard for Mako Athletics.
“But it also sets the standard for academics and our arts,” he said. “It’s not just sports, it’s excellence from top to bottom, side to side throughout our school. This is also a testament to our community. So thank y’all so much.”
The title will forever be a testament to a first year high school varsity team that included seven middle schoolers and no seniors.
In so doing, the Makos will go down as the only program to ever win a state title in a high school’s first year, and they did it by answering their own question.
“Why not us?”