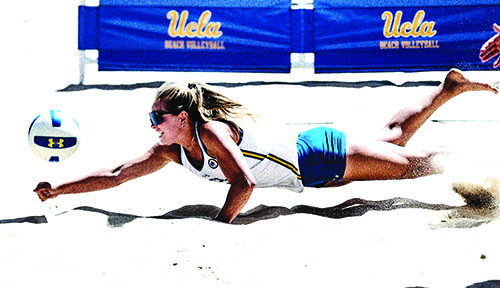 NCAA Beach Volleyball Championship returns to Gulf Shores Public Beach May 7-9
FSU & LSU are south’s best hopes to wrestle title from California powers UCLA & USC
By Fran Thompson
Although the eight teams participating in the NCAA Beach Volleyball National Championship scheduled May 7-9 in Gulf Shores will not be presented until May 2 and ticket info had not been released as of April 20, ticket options are expected to be extremely limited due to Covid pandemic restrictions. The 2020 championship was cancelled.
Even with the event being outdoors on a huge beach, admission will probably be limited to player families when the NCAA officially announces its ticketing policy.
Among the eight teams competing for the 2021 title, three will be selected from the west and three from the east, with two at-large teams rounding out the bracket.
The three teams representing the East region are set, with familiar foes Florida State, LSU and Texas Christian all entrenched in the top 10 of the AVCA poll.
It is certain the top two seeds will be UCLA and USC. The California schools each won two of the first four championships contested in Gulf Shores, and UCLA is the defending champ.
No. 5 Loyola Marymount has the upper hand for the third automatic west seed, with Caly Poly, Stanford, Grand Canyon, Arizona and Pepperdine vying for the two at large slots.
NCAA Beach Volleyball Notes: In December 2017, ESPN signed a multiyear agreement to broadcast the NCAA Women’s Beach Volleyball Championship through 2022 … The championship will also be held in Gulf Shores in 2022 and 2023 before moving to Huntington Beach in California for two years. Gulf Shores will surely put in a bid to host future tourneys … Time-outs have been shortened from 90 to 60 seconds this season, and uniform numbers can now be between 1 and 99 … California recently made girls’ beach volleyball a sanctioned high school sport. Arizona was the first state to do so … A separate pairs tourney to provide competition for teams with more than 10 players was added to last weekend’s AVCA Small College Beach Championships at Florida’s (Tavares) Hickory Point Beach … Seven conferences sponsor beach volleyball: Atlantic Sun (7 members), Big West (7 members), Coastal Collegiate Sports Assn. (12 members), Ohio Valley (6 members), Pac-12 (9 members), Southland (9 members), and West Coast (7 members). The minimum number of participating teams for a conference to qualify for an automatic bid to other NCAA championship tournaments is six, and it is expected that beach volleyball will eventually include automatic championship tourney bids to conference champions … Florida State was the runner-up in two of the four NCAA sanctioned championships, all contested in Gulf Shores … Other southern colleges in the AVCA Coaches Top 25 are Florida Atlantic, Florida International, South Carolina, Stetson, Georgia State, Florida Gulf Coast, Tulane, Coastal Carolina, North Florida and Tampa.
Pictured: Jaden Whitmarsh of defending champ UCLA lays out for a diving save during the Bruins’ win over Florida State. on April 4.