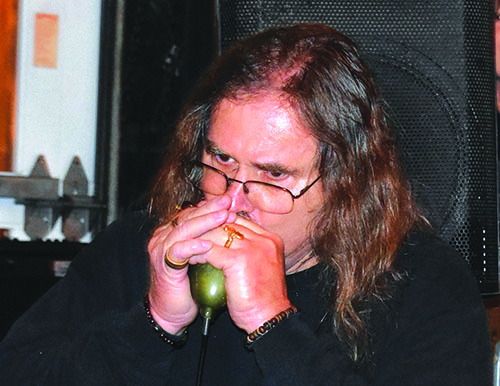 Pirate poet & harmonica playing humorist Gary West inspired creativity in others
By Gregory Hoff
Early in the morning on June 18, our Gulf Coast community lost one of its most colorful personalities. Gary West, our pirate poet and harmonica playing humorist, died peacefully at home, holding hands with Debbie, his wife of 44 years and his daughter Kelly. Gary contracted covid-19 sometime after Christmas. What started out as a mild illness turned much more serious and eventually led to him being taken to the emergency room on January 13. Gary was put on a ventilator for close to two weeks. Through grace and constant medical help, he fought his way back to consciousness and began his month’s long journey of rehabilitation. During that time doctors discovered cancer in his bones and liver that had gone undiagnosed. After three months of intensive care Gary’s family chose to bring him home to spend his last weeks surrounded by the people he loved.
All the stories in Gary’s seventy four years of goodtimes and adventures, would need a book and probably a parental guidance designation.
But what we can say is that..
Gary Brent West, was born March 20, 1947 in Chattanooga to Joyce and Jim Earl West. He was the second oldest of his four siblings, Jimmy, Lisa and Mike. Gary’s mother Joyce was an artist, homemaker and singer in the church choir. An ever patient woman, she raised four smart, strong children. Joyce passed away in Atlanta from covid-19 complications the same day Gary was taken off of the ventilator. She was 96 years old. Gary’s father, Jim Earl, was a tough and imposing lawman. Jim started his career as a policeman in Atlanta and moved on to be a lawyer and federal officer with the department of Alcohol, Tobacco and Firearms. Jim Earl made a name for himself going after gangs of moonshiners. His work taking down the Dixie Mafia has been written about in several books and featured in a recent podcast. Unsurprisingly, he also made a few enemies along the way. Jim taught his children to be watchful in their neighborhood and to be careful opening the door to strangers. One of their homes burned down under mysterious circumstances.
Gary was a born entertainer and quickly learned he could avoid trouble with his father if he could make him laugh. Gary graduated from Avondale high school in 1965 outside of Atlanta. There, he was an outstanding athlete and had already started his first band.
He went on to play football as a running back for Georgia Tech and learned how to party from his fraternity brothers. After two years of college his father recruited him for the ATF. Gary passed his requirements from the Treasury department and began his short career as a lawman himself. He jumped at the opportunity to be reassigned to Mobile, Alabama where he could be closer to the beach and learn how to surf. After a few years Gary and the ATF parted ways, he figured he would have more fun playing music and partying with the surfers than running around busting moonshiners.
Around 1977 Gary met and fell in love with Deborah Jane and in 1978 their first child, Jeremy was born. Soon after, they moved to Gulf Shores and then later settled in Foley before the birth of their daughter Kelly in 1985. Life and the law couldn’t tame Gary but fatherhood brought out the family man in him. No father loved his kids more than Gary loved Jeremy and Kelly. Gary coached his kids and many others in this area in baseball, basketball, soccer and volleyball. He helped in local theater productions and always encouraged everyone to play music and make art. Up through the last few years, Gary inspired many young local musicians to hone their craft and get out and play live.
If you enjoy live music in South Alabama, you’ve probably heard Gary rock out, blowing his harp in dozens of local bands. If you had the fortune of meeting him, he surely made you laugh with a twisted joke and made you wonder how you too could get a little more fun out of life.
Editor’s Note: Check out pictures from Gary’s rollicking memorial at Big Beach Brewery at mulletwrapper.com.