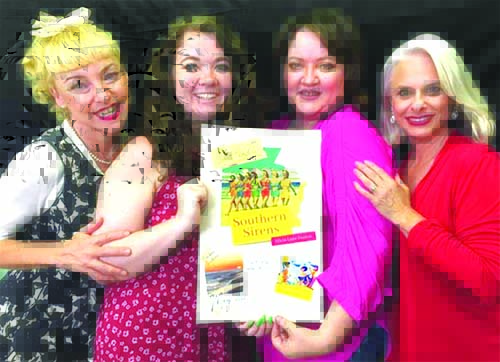 SBCT’s production of “Southern Sirens” opens May 6
By Fran Thompson
Jennifer Dawson will not only play a lead role (Grace) in South Baldwin Community Theatre’s upcoming production of Southern Sirens, she is also directing a cast that includes Lynda Price, Allison Pryor, Paula Ann DeMonico, Paula Dumas, Marley Page and Rose Jordon.
Although she didn’t volunteer for the double duty for the first time in her 30 years as an SBCT mainstay, she has no second thoughts.
“Southern Sirens has allowed me to experience a very unique challenge. We had a cast member unable to continue in the show and we were already late getting started with rehearsals,’’ Dawson said. “The remaining cast asked if I would take the part. I, of course, said yes. It is definitely interesting. Lord help me!’’
SBCT was originally set to produce Picnic this spring, with Dawson directing. But when not enough people auditioned for that production, Dawson suggested Southern Sirens. SBCT, with Dawson directing, was the first theater to produce the play seven years ago.
“It was the perfect choice,’’ Dawson said.
The play is set for May 6, 7, 13 & 14 at 7:30 p.m. and May 8 & 15 at 2:30 p.m. The theater is located at 2022 West 2nd St. in Gulf Shores. Tickets are available at sbct.biz at $15 for students and $18 for adults. The playwright, Alicia Dutton is a good friend of Dawson’s and will be at the May 8 show to participate in a Q & A.
Dawson has been volunteering at SBCT since the 1990’s, before a City of Gulf Shores funded renovation added a box office, kitchen, green room, costume room, outdoor stage and beautiful front entrance to the cozy local theater. Impact 100 provided another $100,0000 for world class stage lighting.
“Our theatre has grown so much over the years and it’s been a great pleasure being a part of its growth on and off stage,’’ Dawson said. “I am so looking forward to seeing the outdoor stage used for more concerts and outdoor plays, and we have some renovations in the works, so stay tuned.’’
Dutton’s play tells the story of five women who met in Spartanburg years ago and every year, without fail, have an all-girls beach getaway. This year Kristin has chosen the avant garde Atlantis Beach House for their accommodation.
The ladies begin drinking Margaritas and divulging some of their biggest secrets to one another. In her luggage, Grace finds a note from Dixie Lynn Lee, soliciting her husband, Preston, into an adulterous affair. This incident catapults the five friends into a series of comical law-breaking behaviors that culminate in the kidnapping of Dixie Lynn in order to teach her a lesson.
During her 30 years volunteering at SBCT, Dawson has also served as the hospitality and special events coordinator. Her acting and directing credits are too many to list.
“I truly can not remember how many shows I’ve been in or helped with. I’m not sure I can tell you which is my favorite either,’’ she said. “They each have a special meaning to me.’’
Dawson’s first community theatre production, as the French maid in Dracula, was in her hometown (Cleveland, MS)
“I haven’t stopped since,’’ she said. “It has been in my heart and soul since high school. I have had the opportunity to work in film and television over the years with award winning actors and directors. Working with local productions has really been fun. I hope to get more involved in that aspect of acting within the next few months.’’
Pictured: (L to R) Paula Ann DeMonico, Marley Page, Jennifer Dawson and Allison Pryor are set to star in the SBCT production of Sirens. Dawson is also directing..